Update Required To play the media you will need to either update your browser to a recent version or update your Flash plugin.
By VOA
Jun 26, 2018


The U.S.-India State and Urban Initiative, led by the Center for Strategic and International Studies [CSIS] Wadhwani Chair in U.S.-India Policy Studies and the CSIS Energy and National Security Program, recently announced three new projects with the state government of Maharashtra, India, as part of the initiative's ongoing work. CSIS has been the implementing partner of the U.S. Department of State in carrying out the Initiative since September 2016.

The goal of the U.S.-India State and Urban Initiative is to build productive energy partnerships between Indian and United States' subnational entities, such as state governments, cities, industry, research institutions, and civil society. 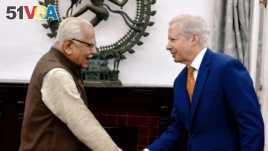 Under this initiative, the government of Maharashtra and the California-based Network for Global Innovation will sign an agreement to develop a clean tech incubator ecosystem in Maharashtra to accelerate adoption of sustainable technologies and encourage growth of trade and investment of these technologies.

The Georgia Institute of Technology will launch a new pilot research project to understand the consumer dynamics and consumers' responsiveness to adoption of new technologies in the electricity sector in Maharashtra.

The city of Pune, in Maharashtra, was recognized as India's first Lighthouse City as a result of a Grand Challenge competition launched in 2017 by the National Institution for Transforming India and Colorado-based Rocky Mountain Institute. A Lighthouse City has demonstrated that it has smart urban development with population density of greater than one million that needs diverse modes of passenger transportation.

The Lighthouse City is supported by an Urban Mobility Lab that will be initially hosted by the Pune Municipal Corporation starting in August 2018.The lab will advance the design, integration, and implementation of new solutions for complex transportation challenges, as well as how these ideas can be replicated and scaled throughout India.The goal is to demonstrate ways to upgrade transportation services to meet the needs of rapidly growing cities, while showing operational efficiency and reduction of pollution, congestion, and petroleum demand.

These announcements were made during the visit of Shri Devendra Fadnavis, honorable chief minister of Maharashtra, to Washington D.C., when he attended a public forum on June 14 cohosted by the CSIS Wadhwani Chair and the India Initiative at Georgetown University to outline his vision for the state of Maharashtra.

The United States is proud to work with India and with private sector partners to help India achieve its ambitious energy goals.