Update Required To play the media you will need to either update your browser to a recent version or update your Flash plugin.
By VOA
Jun 22, 2018


Iran has reportedly arrested another human rights lawyer – the second this month. According to human rights monitors, Zeynab Taheri, defense attorney for the recently executed Sufi bus driver Mohammad Salas, was seized by authorities June 19 after declaring she intended to publish evidence of her client's innocence. She has been charged with spurious crimes like “disturbing public opinion” and “spreading propaganda against the system.”

Earlier in June renowned human rights defender Nasrin Sotoudeh was arrested at her home and taken to Evin prison to serve a five-year sentence for undisclosed crimes. 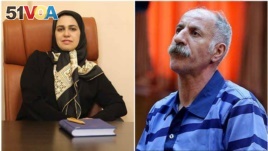 Ms. Taheri has been outspoken about her client's innocence, and about his lack of a fair trial. A member of the persecuted and repressed by authorities Gonabadi dervish community, Mohammad Salas was convicted in the deaths of three policeman who were killed by a bus driver during anti-government demonstrations by Dervish community members in February. At least 300 Sufis demanding the release of one of their members were unjustly arrested and remain in prison.

Both Secretary of State Mike Pompeo and State Department Spokesperson Nauert condemned Mr. Salas's execution, calling it “brutal and unjust.” In a statement, Ms. Nauert pointed out that the defendant had been denied proper access to his lawyer and that exculpatory evidence in the case had been ignored. She noted that “Mr. Salas and his supporters maintained his innocence throughout, stating he had been tortured into a forced confession.

“The application of the death penalty, without affording Mr. Salas the fair trial and appeal guarantees to which he was entitled,” she said, “is a clear violation of Iran's international human rights obligations.”

Now another brave human rights lawyer, who dared to defend a member of a persecuted minority, is herself behind bars. Spokesperson Nauert called for Zeynab Taheri's “immediate release and an end of the Iran regime's persecution of the Gonabadi Dervishes.”

As she said earlier when condemning Mohammad Salas' execution, “The Iranian people deserve rule of law, transparent and accountable governance, and respect for human rights and fundamental freedoms, not the callous impunity that continues to define the regime.”