Update Required To play the media you will need to either update your browser to a recent version or update your Flash plugin.
By VOA
Jun 17, 2018


For nearly a decade now, Boko Haram has used violence in an effort to force its twisted ideology on the people of northeast Nigeria, and has also launched vicious attacks in Cameroon, Niger and Chad. At least 20,000 civilians have been killed in the conflict, and hundreds of thousands more across the Lake Chad Basin are suffering extreme hardship as a result of this violence.

Indeed, Boko Haram and its offshoot, ISIS-West Africa have contributed to a major humanitarian crisis in the region. Some 2.4 million people have been displaced and nearly 11 million people across the region need assistance to survive. The Lake Chad Basin humanitarian emergency is among the most severe in the world. 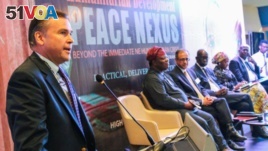 US Ambassador to Nigeria announcing US aid of $102 million for Nigeria's Northeastern Region. (File)

People affected by the ongoing conflict are facing hunger in northeast Nigeria, including over one million in hard to reach areas due to Boko Haram's presence. According to the Famine Early Warning Systems Network, at least one in 5 households in Nigeria's Adamawa, Borno, and Yobe states may not be able to feed themselves without aid, or may often go hungry through this coming September. Elsewhere, a significant number of people in Cameroon's Far North Region, Chad's Lac Region, and Niger's Diffa Region may also find it difficult to obtain enough food through September.

On June 7, U.S. Ambassador to Nigeria Stuart Symington announced nearly 112 million dollars in additional humanitarian assistance to those needing help in the Lake Chad Basin, including nearly $102 million for people in Nigeria.

The funds will provide life-saving aid to hundreds of thousands of people, including emergency food, nutrition treatment, shelter, health care, safe drinking water, services for survivors of sexual violence, and support to children separated from their families.

The United States remains committed to helping the people affected by the terrorist group Boko Haram and its offshoot ISIS-West Africa. A comprehensive political and security solution is ultimately the only way to bring peace to the region and end the suffering of the people there.

The United States calls on the global community to follow our example and donate generously to address the basic life-saving needs of the displaced, and the communities that host them.