Update Required To play the media you will need to either update your browser to a recent version or update your Flash plugin.
By VOA
May 28, 2017


The United States and Saudi Arabia are dedicating themselves to a new strategic partnership for the 21st century, and to charting a renewed path toward a peaceful Middle East marked by economic development, trade, and diplomacy, said U.S. Secretary of State Rex Tillerson.

The United States and Saudi Arabia announced the signing of more than 30 agreements representing foreign military sales and commercial deals valued at more than $350 billion if fully implemented; $109 billion of that is in arms sales to bolster the security of Saudi Arabia. This will result in thousands of American jobs created through direct investments in the United States and purchases of American goods, American equipment, and American technology. American companies' bottom lines will also benefit from increased investments into Saudi Arabia. 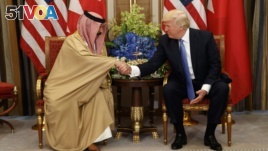 “The package of defense equipment and services supports the long-term security of Saudi Arabia and the entire Gulf region,” said Secretary Tillerson, “in particular in the face of malign Iranian influence and Iranian-related threats which exist on Saudi Arabia's borders on all sides.”

Additionally, it bolsters Saudi Arabia's ability to provide for its own security and to contribute to counterterrorism operations across the region.

In an effort to win the battle for the hearts and souls of would-be terrorists, Saudi Arabia has opened the new Global Center for Combatting Extremist Ideology. It is intended to be a Saudi-led hub for defeating extremism in the information world. It is critical to take on ISIS in cyberspace, said Mr. Tillerson, as “this is their recruiting tool. This is how they message to lone wolves around the world.”

Gulf Cooperation Council members, including Saudi Arabia, have signed a new agreement with the United States to combat terrorist financing.

Moreover, Gulf Cooperation Council members, including Saudi Arabia, have signed a new agreement with the United States to combat terrorist financing. The Terrorist Financing Targeting Center, co-chaired by the Treasury Department and the Saudi Arabian Ministry of Interior, represents a new and creative response that leverages existing tools and formalizes cooperation between the United States, Saudi Arabia and partners in the Gulf to counter terrorist financing.

These steps will serve to create a renewed strategic partnership between the United States and Saudi Arabia aimed at eradicating terrorism and strengthening economic development and peace.