A Push to Change Confederate School Names across US South

Update Required To play the media you will need to either update your browser to a recent version or update your Flash plugin.
By Alice Bryant
08 September 2020


Trude Lamb is a top cross country runner at Robert E. Lee High School in Tyler, Texas. But the name on her sports jersey, she says, is a sharp reminder of a man "who didn't believe people like me were 100 percent human."

Over the summer, she wrote a letter to Tyler school board officials. Lamb, who is from Ghana, told them she had seen the horrific conditions of slave dungeons on the African coast. She said that she could not support a name that celebrates a Confederate general who fought on the side of slavery. Lee commanded southern rebel forces against the U.S. military during the Civil War.

Along with many current and former students at the high school, Lamb pushed to change the school's name this year. The campaign was launched under the hashtag #wewontwearthename.

The school board approved the change in July after years of resistance. 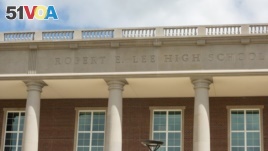 "That name was not a black supporter. He owned slaves," said Lamb. He did anything he could to harm or remove Black people, she added. "I'm like, ‘No, not wearing this name on my jersey,'" she told The Associated Press.

More than 100 public schools in the United States are named for Confederate leaders. Perhaps 90 percent of them are named for General Robert E. Lee, Confederate President Jefferson Davis or General Stonewall Jackson. That information comes from the Southern Poverty Law Center.

Many of the schools were founded as all-white schools during the days of racial segregation. But now they also serve African American students. At least 12 now have majority Black student bodies.

A new push has come to rename many of the schools as nationwide protests over police abuse and racial injustice have led to the removal of Confederate statues. Several school systems in Alabama, Texas and Virginia have voted to change school names in recent months, but local resistance and state laws make that no simple act.

Lamb gained national attention for her letter to the Tyler, Texas, school board. She has since become a target of social media attacks with racist language and even threats of violence, her mother said.

In Montgomery, Alabama, three high schools are named after Lee, Davis and Sidney Lanier, a writer who was a Confederate soldier.

"It's a basic insult to all the African American children who would have to walk past a statue or go to a school that is named after a white supremacist," said Amerika Blair. She was among those pushing for the change. Blair attended Robert E. Lee High in Montgomery and completed her studies there in 2009.

The Montgomery County School Board voted in July to change the names of the three schools. But a 2017 state law protects Confederate statues and other long-standing memorials and names. The school system will have to get special permission from a committee and the soonest it would get a decision is October. If denied, the school system must pay $25,000 for breaking the law by changing the name without permission.

Like many other Confederate-named schools, Lee in Montgomery opened as an all-white school in 1955. That was one year after the U.S. Supreme Court ruled that segregated schools were unconstitutional. At that time, the South was actively fighting federal orders to integrate. But after integration became law, white people left some neighborhoods. So, a lot of the schools became heavily African American.

A statue of Lee stood outside the school for many years — facing north to keep an eye on his enemies, school legend says. But in June, a group of people pushed the statue down. Four individuals were arrested but the charges were later dropped.

Similar pushes to rename schools are taking place across the country. The Southern Poverty Law Center said about 40 schools have been renamed or closed in the past few years.

In Virginia, the removal of Confederate names began in the state's northern cities and towns in 2018. That is when J.E.B. Stuart High in Falls Church changed to Justice High. Washington-Lee High School in Arlington changed its name to Washington-Liberty at the start of the 2019-2020 school year.

The movement to change school names expanded outside northern Virginia as Black Lives Matter protests took hold after the police killing of George Floyd in May. For example, in Hanover County, a conservative area near Richmond, the school board voted narrowly to change the name of Lee-Davis High.

Changing names is part of the move from one period in history to another, noted historian Wayne Flynt. He has written many history books on the American South.

Flynt pointed out a connection between school names and inequity. He said the same beliefs that led to the Confederate school names also created education systems that often leave minority children in underfunded and failing schools.

The Associated Press reported this story. Alice Bryant adapted it for Learning English. George Grow was the editor.

reminder – n. something that causes you to remember or to think about something

dungeon – n. a dark underground prison in a castle

Confederate – n. a soldier, citizen, or supporter of the Confederacy during the American Civil War

hashtag – n. a word or phrase that starts with the symbol # and that briefly indicates what a message is about

segregation – n. the practice or policy of keeping people of different races or religions separate from each other

integration – n. the act of ending a policy that keeps people of different races apart in a place

legend – n. a story from the past that is believed by many people but cannot be proved to be true

underfunded – adj. not having enough money to do what is needed