Update Required To play the media you will need to either update your browser to a recent version or update your Flash plugin.
By Alice Bryant
13 February 2021


A large conch shell brought little attention in a French museum for many years, but it is now quickly gaining attention.

The shell is thought to be the oldest known seashell instrument. And it still works, producing a deep sound, like a foghorn from the distant past.

The shell was found during the exploration of a cave with prehistoric wall paintings in the Pyrenees Mountains in southwestern France. It was believed to be a ceremonial drinking cup. Scientists from the University of Toulouse in France recently took a fresh look at the conch shell. They now believe it was changed thousands of years ago to serve as a wind instrument. They also invited a French horn player to play it. 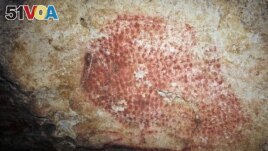 This photo provided by researcher Carole Fritz in February 2021 a prehistoric wall painting depicting a bison, in a French cave discovered in 1931. Using modern microscopy techniques to examine how a conch shell found at the site was modified and hiring a

"Hearing it for the first time, for me it was a big emotion" and caused some worry, said archaeology researcher Carole Fritz. She feared that playing the 31-centimeter-long shell might damage it, but it did not. The horn produced clear musical notes in C, C sharp and D.

The researchers estimate it to be about 18,000 years old. Their findings appeared Wednesday in the publication Science Advances.

The latest discovery was made after a recent inventory at the Natural History Museum of Toulouse. The researchers noticed some unusual holes in the shell. Especially important is that the end of the shell was broken off. That created a hole large enough to blow through. Inspections with a microscopic showed that the opening was made by humans. It was not accidental breakage or wear, Tosello said.

By putting a small medical camera into the shell, the researchers found that another hole had been carefully made farther inside. They also found evidence of red coloring on the mouth of the conch. It matched a design found on the wall of Marsoulas cave.

"This is classic, really solid archaeology," said Margaret Conkey. She is an archaeologist at the University of California, Berkeley but was not involved in the research. This discovery reminds us that ancient people's lives were more complex than making stone tools and hunting large animals, she said.

Marsoulas cave is not near an ocean. So the prehistoric people must have either moved around or traded to get the shell, Conkey and the researchers said.

"What makes conch shells so interesting is that the spiral" part formed by nature is great at making music, said Rasoul Morteza. He is a musician in Montreal, Canada, who has studied how sound is made with conch shells. He also was not involved in the paper.

Using a model of the shell, the archaeologists plan to continue studying the horn's sounds. Tosello said he hopes to hear the ancient instrument played inside the cave where it was found.

It is wonderful when an object is forgotten somewhere and suddenly it "comes again into the light," he said.

conch shell –n. the hard, outer covering of a shellfish called a conch

foghorn –n. a special device used on boats and lighthouses that makes a very loud, deep sound used to warn ships of danger in bad weather

cave –n. a large hole or room underground that is formed by natural processes

archaeology (archeology) –n. a science that deals with past human life and activities by studying bones and tools of ancient people

inventory –n. the act or process of making a complete list of things that are kept in a place

classic –adj. something used as an example of excellence

spiral –n. a circular curving structure that becomes increasingly thin at one end