'Blue Shift' From US Mail Ballots Might Cause Election Week Unrest

Update Required To play the media you will need to either update your browser to a recent version or update your Flash plugin.
By Ashley Thompson
15 September 2020


When voting stations closed in Arizona on Election Day in 2018, Martha McSally appeared to have won a seat in the United States Senate. McSally, the Republican Party's candidate, received the largest number of votes based on results from in-person voting. But her lead disappeared in the days that followed, with the counting of mail-in ballots.

"Electoral corruption - call for a new election?" President Donald Trump wrote on Twitter at the time. His suggestion had no effect. Six days after Election Day, McSally confirmed that she had lost to Kyrsten Sinema, the Democratic candidate.

A similar "blue shift" – with blue representing Democrats -- could play out in the U.S. presidential election on November 3. Some observers say Trump, a Republican, could have the most votes in early election returns but that Democrat Joe Biden could end up the winner in the days that follow.

Nearly half of Democrats say they plan to vote by mail. Only about one fourth of Republicans plan to do so. That information comes from an opinion study of likely voters by Reuters/Ipsos. Demand for mail-in voting is driven, in part, by fear of infection from the coronavirus in public.

Counting mail-in ballots is often slower because officials must open thick envelopes, inspect the ballots, and confirm voters' identities. The process is slower and more complex than that at polling stations, where voters mark ballots in person.

Biden's campaign is reportedly preparing for Trump to say that the election is being stolen as the lead changes. Even some Republicans worry that Trump might use the situation to question the results if he loses.

"The longer it takes to count absentee ballots, the more the narrative will take hold among Trump supporters and will be their ‘proof' to question unfavorable election results," said Dennis Darnoi. He is a Republican political strategist based in Michigan.

Trump has made unproven claims that mail voting leads to fraud. Many studies, however, show that voter fraud in the United States is extremely rare.

Trump has not said whether he will respect the election results if he loses.

In more than 30 states, election officials can begin processing or even counting ballots before Election Day. These include states considered "battleground states" -- where races between the Republican and Democratic presidential nominees have been historically close.

But three states considered among the most competitive - Michigan, Pennsylvania and Wisconsin - bar officials from processing or counting ballots before Election Day. This may create delays in the results. 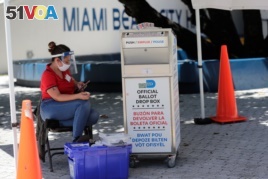 FILE - A poll worker wears personal protective equipment as she monitors a ballot drop box for mail-in ballots outside of a polling station during early voting, in Miami Beach, Florida. Aug. 7, 2020.

Rick Hasen is a law professor at the University of California at Irvine. He notes that, "If the election comes down to these states, and everyone is waiting on results, I'm concerned about social unrest. This is especially true if Trump is ahead on Election Day."

"President Trump and his campaign are fighting for a free, fair...election in which every valid ballot counts — once," she said.

A winner in the presidential race might be known quickly if states such as Arizona and Florida publish results shortly after polls close. Both states have a long history of mail-in voting.

"The most likely scenario is that we'll know who the president is on Election Night," said Michael McDonald, a political science professor at the University of Florida.

Florida election officials, for example, will begin opening and confirming ballots at least three weeks before the election. They are not, however, permitted to count the results to know which candidate is ahead during that time.

U.S. presidential elections are decided by an Electoral College, not the popular vote. This means results in a battleground state like Florida, with 29 of the 270 electors needed to win, could decide the election results once its own vote counts are known.

In Michigan, an effort to process ballots a day before Election Day has failed to move forward. Some Republicans have argued that it might permit local officials to influence the results.

Ruth Johnson is the Republican state senator who proposed the bill to process ballots early. Johnson said she did not know why the state's Republican Senate Majority Leader had yet to act.

"It needs to be a priority, and I believe we do have the votes," she said.

Thea McDonald of the Trump campaign said it is "opposed to election officials knowing - and potentially attempting to change - the running tally before Election Day."

The Reuters news agency reported this story. Ashley Thompson adapted it for VOA Learning English. George Grow was the editor.

shift - n. a change in position or direction

narrative- n. a story that is told or written

envelope - n. an enclosing cover for a letter, card, etc.

strategist -n. a person who is skilled in making plans for reaching a goal

ahead - adv. in the lead in a race or competition