Update Required To play the media you will need to either update your browser to a recent version or update your Flash plugin.
By Susan Shand
13 June, 2018


Turkey is busy preparing for elections later this month. President Recep Tayyip Erdogan hopes to be re-elected in the June 24 vote.

Erdogan says the latest reports on the Turkish economy show his economic policies are working. Voters and international investors, however, are not so sure about the country's economic strength.

The economy grew by 7.4 percent in the first three months of this year. That growth rate beat what many economists expected for the quarter.

"We continue to be one of the fastest-growing countries in the world," the Turkish president said at an election campaign stop in Istanbul. Erdogan claimed victory against what he called "conspirators" whom he blamed for a sharp drop in value of the Turkish lira.

In May, the lira fell more than 10 percent as investors fled the Turkish market over concerns about high inflation and a growing current account deficit.

Financial order returned after a sharp increase in interest rates, which helped the lira's value rise against other money.

But experts warn the strong growth will only fuel concerns that the government cannot continue to spend lots of money on public services.

"The current account deficit is more than 6 percent of GDP and inflation above 12 percent," Inan Demir of Nomura Holding noted on Monday. Demir, an economist, added that after the elections the government must cut back on spending or the value of the lira will fall again.

Turkey's strong economy has helped Erdogan and his AK Party during their 16 years of electoral success. The economy has been expanding for over a year. But studies have found that many Turks are dissatisfied with the government's economic program.

Fifty-one percent of likely voters who were questioned said the economy was their major worry. The Metropoll research service reported the finding. Last year, security problems were the number one concern among voters. Other studies found that a majority of voters blamed the government for their economic problems.

"It's a...liability for Erdogan," said Atilla Yesilada of Global Source Partners. He noted that while employment has decreased, prices have risen. He also said no one is investing in new factories because interest rates on loans have topped 22 percent.

Yesilada explained that the economic growth has not helped the people on the streets, so there is a lot of public anger.

Payments ahead of elections

In May, Erdogan announced retirees would receive two payments of over $200 timed to religious holidays. The first payment is set to go out this week.

But Atilla Yesilada warned that the money means little because of the financial pain caused by the increase in interest rates.

"We all use loans. The middle class use loans to buy houses. Businesses use loans to expand. Even before the latest (interest) hikes, they were already at a 10-year high. Banks have nearly stopped making new loans," Yesilada said. He added that a recession is likely.

Candidates competing against Erdogan for the presidency talk about economic fears. 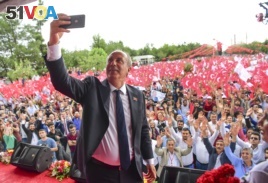 &#304;nce is the presidential candidate of the CHP Party. He said that "Turkey is heading to dark days. Don't be surprised if the Turkish lira hits 8 or 10 to the (United States) dollar. When troubled days have come to countries around the world, they couldn't get through them unless they changed leaders."

Erdogan's public works projects are also a target in the election campaign. They include building one of the world's biggest airports and some of the longest bridges.

The presidential candidate for the &#304;Y&#304; (Good) Party, Meral Aksener, said Turkey has the financial resources, but she thinks some officials are corrupt. She noted that the government built up a budget deficit of $453 billion in debt. "What happened in return? Did your son find a job?"

Turkey watchers believe the attacks by Erdogan's opponents over the economy are likely to grow stronger. Economic concerns are expected to continue to be the main issue in the June 24 elections.

The election campaign is leading to less than certain results, noted Sinan Ulgen, head of the Istanbul-based Edam research group. He added that the Turkish lira is under pressure because of worries about the direction of the economy.

Anti-Erdogan politicians accuse the president of calling elections 18 months early so he could take use the country's strong economy to support his campaign. But many studies of likely voters now show Erdogan's lead is getting smaller. Observers warn the economy that was once Erdogan's greatest strength could be what leads to his removal from office.

Dorian Jones reported this story for VOANews. Susan Shand adapted his report for Learning English. George Grow was the editor.

conspirator – n. Someone who plots with other to do bad things

GDP – n. short for Gross Domestic Product, the total value of the goods and services produced in a country during a year

account – n. a financial instrument in which a bank keeps a record of the money that a person puts in and takes out of the bank

liability – n. the state of being legally responsible for something

inevitable - adj. something that is sure to happen

resource – n. something that a country has and can use to increase its wealth