North, South Korea to March Together at Winter Olympics

Update Required To play the media you will need to either update your browser to a recent version or update your Flash plugin.
By Mario Ritter
17 January, 2018


North and South Korea have agreed to march together in the opening ceremonies of the 2018 Winter Olympic Games.

Negotiators for the North and South announced the deal Wednesday after talks in Panmunjom on the border between the countries.

The negotiators also said that the two Koreas will compete as one team in the women's ice hockey event.

North Korea plans to send a more than 400 member delegation to South Korea for the winter games in Pyeongchang. The delegation will include 230 cheerleaders and a 30-member team for a taekwondo demonstration.

The North also said it plans to send a delegation of about 150 to Pyeongchang for the 2018 Paralympics Games, which are to be held in March.

The two Koreas released a joint statement after their talks on Wednesday.

Many details of the plan have yet to be discussed with the International Olympic Committee (IOC). 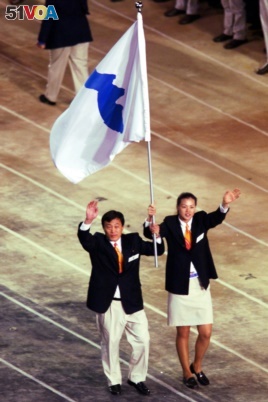 FILE - In this Sept. 15, 2000, file photo, Pak Jung Chul, left, a North Korea's Judo coach, and Chung Eun-sun, a South Korean basketball player, carry a flag representing a united Korea into Olympic Stadium during the Opening Ceremony of the Olympics.

Two North Korean figure skaters were chosen earlier to compete at the winter Olympics. The statement did not confirm their participation. However, the IOC said recently that it has "kept the door open" for North Korea to take part at Pyeongchang.

IOC officials are set to meet on January 20 in Lausanne, Switzerland. The group will discuss details of the joint team and North Korea's participation.

In a statement, the IOC said it was considering several proposals.

"There are many considerations with regard to the impact of these proposals on the other participating NOCs (national Olympic committees) and athletes," it said.

The Winter Games will take place from February 9 to the 25th.

It has been nearly 12 years (Feb 10 2006) since North and South Korea marched together at the Olympics. North Korea's participation next month would be the North's first appearance in any Olympic Games held in the South.

Esha Sarai reported this story for VOA News. Mario Ritter adapted her report for Learning English. His story includes information from the Associated Press and Reuters. George Grow was the editor.

participation –n. to be involved with others in doing something, to take part in an activity or event with others

impact –n. to have a strong or meaningful effect