Researchers Call for a Use Tax to Clean up Space

Update Required To play the media you will need to either update your browser to a recent version or update your Flash plugin.
By Mario Ritter Jr.
31 May 2020


Orbital structures are becoming increasingly important for worldwide communications and a new generation of technologies. But scientists are warning that the danger of space debris is increasing very quickly.

Space debris can include pieces of old rockets, non-operational satellites, lost tools and other parts. These pieces of wreckage present a risk to spaceships, satellites and space stations.

In an effort to reduce the amount of debris orbiting the Earth, some experts suggest creating "orbital-use fees." 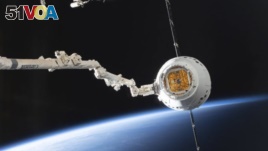 In this image provided by NASA, the SpaceX Dragon capsule arrives at the International Space Station, Sunday, Dec. 8, 2019. Some researchers are proposing an orbital tax to prevent countries from launching too many objects into space.

A group of economists at the University of Colorado at Boulder proposed a yearly fee, or tax, on satellite operators for their use of an orbital path. The group's study on the subject appeared recently in the publication Proceedings of the National Academy of Sciences.

Matthew Burgess helped write the study. He said in a statement: "Space is a common resource, but companies aren't accounting for the cost their satellites impose on other operators when they decide whether or not to launch."

Burgess added, "We need a policy that lets satellite operators directly factor in the costs their launches impose on other operators."

The researchers said current rules do not permit satellite operators to secure property rights to orbital paths high above the Earth. Other operators also do not have to pay for costs related to incidents involving space debris, the researchers noted.

The study said that this situation gives companies a reason to quickly launch into Earth orbit before it gets too crowded.

Akhil Rao was the lead writer of the study. He said most proposed answers to the problem have been based on using technology to clear away the debris. Some suggestions, for example, call for nets or other devices that capture the space wreckage.

But, Burgess said that removing debris only means that operators will launch more satellites.

He said an international treaty calling for a yearly fee or tax would push companies to be more mindful about launching more objects into space.

Christopher Newman is a professor of space law at Northumbria University in Britain. He told the Thomson Reuters Foundation that carrying out a space tax could be tricky.

Newman noted that such a cost could be seen as a restriction on the free use of space. That freedom is guaranteed in the Outer Space Treaty of 1967. The United Nations document has been signed by more than 100 nations.

Newman added that the effort to place a fee on the use of space could easily be slowed by the many details involved.

impose –v. to cause something, such as a tax, to affect people using official power

factor in –n. to consider or include something when making a judgement