Update Required To play the media you will need to either update your browser to a recent version or update your Flash plugin.
By Bryan Lynn
18 May, 2019


San Francisco officials have approved a ban on the use of facial recognition technology by local law enforcement and agencies.

The city's governing Board of Supervisors approved the ban this week. The board is expected to give final approval to the measure during a second vote next week.

If given final approval, the ban would be the first of its kind passed by an American city. The measure bars the use of facial recognition by local police and all other city agencies.

The ban is part of a bill that restricts surveillance technologies. The measure also orders San Francisco agencies to describe any current or future facial recognition activities.

Use of facial recognition technology by government agencies across the U.S. has continually increased over the past 10 years. The machine-learning methods that power the technology have also greatly improved in recent years. 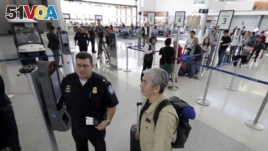 But the systems are not perfect.

Privacy groups supporting the ban argue that facial recognition systems make too many mistakes and can violate personal rights. For example, they say failures of the technology to correctly recognize race could violate a person's civil rights. Several studies have shown the technology can have difficulties correctly guessing a person's race.

Opponents of the ban included law enforcement agencies and some technology companies. They say the use of facial recognition systems should be permitted to help police identify and catch criminals. They also argue the technology can be a useful tool to help find lost children or older people.

American technology company Microsoft is one company developing facial recognition. However, it has joined critics in calling for restrictions on use of the technology by government agencies. Microsoft president Brad Smith said last year he saw an urgent need to begin placing limits on the systems to avoid the kind of surveillance state described in George Orwell's book "1984."

Alvaro Bedoya heads the Center on Privacy and Technology at Georgetown University in Washington. He told the Associated Press he thinks facial recognition "is one of those technologies that people get how creepy it is."

Bedoya noted that San Francisco is considered the "most technologically advanced city" in America. A ban on facial recognition systems there could send a warning to other police agencies thinking of trying out the technology, he said.

California state lawmakers are already considering a proposal to ban the use of facial identification technology with police body cameras. And a bill before the U.S. Senate would restrict businesses from using the technology on individuals without their permission.

But Daniel Castro, vice president of the Information Technology and Innovation Foundation, says he is not sure what effect San Francisco's ban could have nationwide. He said he believes the measure may be too extreme to serve as a general model.

"It might find success in San Francisco, but I will be surprised if it finds success in a lot of other cities," Castro said.

advanced – adj. having progressed to a high level