Update Required To play the media you will need to either update your browser to a recent version or update your Flash plugin.
By Phil Dierking
13 February, 2018


South Africa's ruling party has ordered Jacob Zuma to step down as president. It is not clear, however, if Zuma plans to follow the order.

Zuma's party, the African National Congress, or ANC, made the order on Tuesday. It came after a week of negotiations failed to persuade the president to quit.

Ace Magashule is the secretary-general of the ANC. He spoke to reporters on Tuesday. Magaschule said party leaders informed Zuma of their decision after meeting for thirteen hours in Pretoria.

Zuma has not made an official statement about the decision. And Magashule said the ANC had not given Zuma an exact time to respond. But Magashule said he spoke with the president and expects Zuma to respond by Wednesday.

The South African constitution does not require Zuma to agree to his party's wishes. But if he refuses to step down, the issue will go to the parliament. Lawmakers there will vote on a motion of no confidence. If a majority of lawmakers support the motion, Zuma will be removed.

Magashule said Zuma had asked the party to give him three to six months before stepping down. The ANC rejected the request, saying the situation "requires us to act with urgency."

Magashule said the party needs to restore the country's confidence in their government and work quickly toward economic recovery.

A history of scandal

Zuma became president in 2009. Since then, he has been linked to a number of scandals. One relates to misuse of public money. South Africa's highest court found that Zuma violated the constitution by using about $20 million of public funds to improve his home.

Zuma has also been charged with corruption related to a weapons deal he made in the late 1990s. State lawyers are expected to announce soon if they will restore those charges.

South Africa has also seen its economy suffer during Zuma's time in office. And investment from banks and mining companies has slowed. ANC party officials say the issues are a result of the problems and political uncertainty surrounding Zuma. 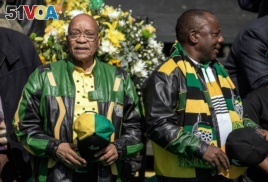 If Zuma leaves, Cyril Ramaphosa, would likely become the next South African president. Ramaphosa is currently the president of the ANC. He narrowly defeated Zuma's ex-wife for the position.

Since Ramaphosa was elected party president, pressure has increased on the 75-year-old Zuma to step down.

However, the party's leadership was divided on when Zuma should leave, the secretary general of the ANC said. Zuma's current term is scheduled to end next year, when South Africa holds general elections.

Do you think it help a country to ask their president to step down? We want to hear from you. Write to us in the Comments Section or on 51VOA.COM.

motion - n. a formal suggestion or proposal that is made at a meeting for something to be done