Update Required To play the media you will need to either update your browser to a recent version or update your Flash plugin.
By Bryan Lynn
27 March, 2018


Many studies have predicted there will be a great need for future workers skilled in jobs related to science, technology, engineering and math. In education, these areas of study are known as STEM.

Research suggests it is important to get students involved in STEM subjects as early as possible, starting in middle school or even before.

While STEM education programs have been increasing in many areas across America, there remains a lack of interest in the subjects by many younger students.

The U.S. Department of Education has estimated that once students reach their last year of high school, only 16 percent are interested in a STEM career. A department study also found that even among those who do choose to study STEM subjects in college, only about half decide to work in a STEM-related job. 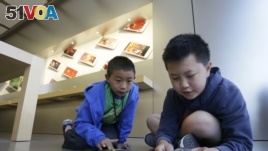 A survey released this year by Pew Research Center asked American adults why they believe many young people do not want to study math and science subjects.

About 64 percent of those questioned said they think the main reason is that students consider STEM studies either too hard (52 percent) or too boring (12 percent). More than 20 percent blamed the lack of interest on the belief that a STEM degree might not be useful in the job market.

The study found about one-third of Americans would tell a high school student seeking career guidance to study a STEM-related field. About 19 percent of them said they would suggest a health-related STEM career. And fourteen percent would tell them to center on technology.

STEM careers made up about 13 percent of the total U.S. work force in 2016. However, the number of STEM-related jobs – especially in health and computer areas – has risen much faster than other areas for years.

In its latest new study on STEM-related education, Pew also looked at the feelings American adults have about their own classroom experiences in math and science.

It might surprise some people to learn that 58 percent of adults in America said they enjoyed their math class experiences in grades K-12. Of the American adults who had good memories of their math classes, 61 percent said the main reason was because they liked the subject matter.

Of the 42 percent who said they did not like their math classes, 59 percent said it was because they did not enjoy the subject matter.

The study found that 62 percent of men reported liking math class, compared to 53 percent of women.

When asked about science, even more American adults said they enjoyed their classroom experiences. More than 75 percent said they liked science in grades K-12. Nearly half of those questioned said they liked both science and math classes.

A majority of adult American STEM workers, 66 percent, said they liked both math and science classes. This compared to about 45 percent of people working in non-STEM fields. Only five percent of STEM workers said they disliked both science and math.

Bryan Lynn wrote this story for VOA Learning English, based on Pew Research Center data and other sources. Ashley Thompson was the editor.

Did you like attending math and science classes in grades K-12? Why or why not? Write to us in the Comments section, and visit 51VOA.COM.

K-12 - adj. relating to primary and secondary education. The term is used in the United States, Canada and other countries to describe publicly supported school grades before the start of college.