Update Required To play the media you will need to either update your browser to a recent version or update your Flash plugin.
By Bryan Lynn
10 March 2021


Google has announced plans to stop supporting tools designed to follow internet users across the web in order to target them with specific advertising.

Such tools are known as cookies. These are small data files that are stored on an internet user's computer as they browse different websites. This data can be read by web servers to identify web browsing behaviors of the user. 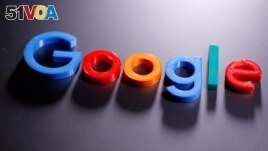 Cookies make it possible for users to avoid having to repeatedly enter their user names and passwords to get access to websites they use often. But the use of cookies raises major privacy concerns, with critics saying a user's browsing history should not be recorded just to target them with ads.

Google announced in 2020 it had decided "to remove support for third-party cookies" from its Chrome browser. Chrome has a world market share of about 60 percent. Other browsers, such as Mozilla's Firefox and Apple's Safari, have already blocked third-party cookies.

In another recent online announcement, Google repeated this promise and said it will not build or use new tools to replace current cookie technology.

In explaining its decision, Google pointed to a Pew Research study that found 72 percent of Americans feel that almost all of what they do online or on a cellphone is tracked by advertisers. Google's decision to remove third-party cookies also followed increasing efforts to protect privacy in Europe and the United States.

Google said the current internet advertising model needs to change to answer "the growing concerns people have about their privacy and how their personal identity is being used." Otherwise, it added, "we risk the future of the free and open web."

In January, however, Google's plan was called into question by British competition regulators. The country's Competition and Markets Authority announced it had launched an investigation into whether the changes would give Google an unfair advantage over competitors in internet advertising.

The agency said it received objections to the plan from Marketers for an Open Web, a coalition of technology and publishing companies. The group accuses Google of "abusing its dominant position" by attempting to create a new advertising model.

In its latest statement, Google said it has been working with others in the industry on the "Privacy Sandbox" project, which aims to create a new system to please both advertisers and publishers. Google also repeated that it does not plan to replace third-party cookies with new "user level identifiers."

"We will not build alternate identifiers to track individuals as they browse across the web, nor will we use them in our products," the company said.

What Google is proposing is to group web users with similar interests together to gather information for advertising purposes. Such a system would "hide individuals within large [groups] of people" and prevent individual tracking, the company said.

Businesses could, for example, target ads to a group of people who show interest in buying a car, rather than using cookies that tracked individual users across different car-buying websites.

James Rosewell heads Marketers for an Open Web. He told The Associated Press that even though the changes are aimed at improving user privacy, Google will still be able to track users of its own services.

The Associated Press reported this story. Bryan Lynn adapted the report for Learning English. Hai Do was the editor.

browse – v. to look at information on the internet

track – v. to follow and watch the progress of a process or project

regulator – n. a part of the government that controls a public activity by making and enforcing rules

dominant – adj. the main or most important

alternate – adj. taking the place of something else

log in – v. to connect a computer to a system of computers by usually entering a name and password