Update Required To play the media you will need to either update your browser to a recent version or update your Flash plugin.
By Bryan Lynn
25 February 2021


The U.S. space agency NASA has released the first video, pictures and sound captured by its Mars explorer Perseverance.

The video shows the explorer, or rover, at different points during its landing on the Red Planet last week.

Some members of the Perseverance team said the video and images were even better than they had expected. "It gives me goose bumps every time I see it, just amazing," said Dave Gruel. He is head of the spacecraft's landing camera team.

Al Chen heads the Perseverance landing team. He called the pictures and video "the stuff of our dreams."

Six color cameras were positioned to capture all stages of the landing. NASA said the cameras started when the rover was about 11 kilometers above the surface of Mars.

Flight controllers were also pleased with the thousands of images that Perseverance sent back to Earth. They said the rover was in very good condition after the landing.

Perseverance landed in an area of Mars called Jezero Crater, just north of the planet's equator. The area contains a large ancient lakebed. The six-wheeled explorer's main mission is to collect Martian soil and rocks to help scientists search for signs of ancient life. 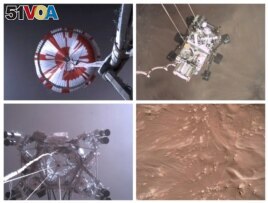 This combination of images from video made available by NASA shows steps in the descent of the Mars Perseverance rover as it approaches the surface of the planet on Feb. 18, 2021.

NASA added 25 cameras to the Perseverance mission -- the most ever sent to Mars. The space agency's last rover, 2012′s Curiosity, is only able to produce lower-quality images of the planet's surface.

NASA said it also received sound from Perseverance. A microphone attached to the rover was not able to collect usable data during the actual landing. But it did record sounds from Jerezo Crater after it touched down.

NASA said that about 10 seconds into a 60-second recording, Martian wind can be heard for a few seconds. Equipment sounds were also captured as the rover operated on the surface.

The video and images provided NASA with the possibility to see the effectiveness of spacecraft systems – some of which could not be tested on Earth. "So this is the first time we've had a chance as engineers to actually see what we designed," said Matt Wallace, a project official with NASA's Mars 2020 program.

Thomas Zurbuchen is NASA's science mission chief. He said the video and panoramic pictures that Perseverance captured "are the closest you can get to landing on Mars without putting on a pressure suit."

NASA engineers say the images will help the agency prepare for astronaut flights to Mars in the future. But, imaging scientist Justin Maki noted that the pictures and videos can offer more immediate help, as well.

"I know it's been a tough year for everybody," Maki said. "And we're hoping that maybe these images will help brighten people's days."

Bryan Lynn wrote this story based on reports from NASA, The Associated Press and Reuters. Ashley Thompson was the editor.

goose bumps – v. a roughness on the skin produced by a sudden feeling of cold, fear or excitement

panoramic – adj. a very wide view of something