Study: Plant-eating Dinosaurs Arrived Late to Northern Half of the World

Update Required To play the media you will need to either update your browser to a recent version or update your Flash plugin.
By John Russell
20 February 2021

The study used a new way to estimate the age of dinosaur remains found in Greenland. Researchers found that the plant-eating dinosaurs were about 215 million years old. The mineralized remains of bones are called fossils. Earlier, those fossils were thought to be as old as 228 million years. 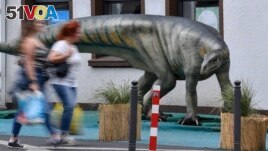 The findings appeared in Proceedings of the National Academy of Sciences of the United States of America. They could change how scientists think about dinosaur movements, or migrations.

The earliest dinosaurs all seemed to first develop about 230 million years ago or longer. They appeared in what is now South America. Then, the creatures moved north and spread all over the world. The new study suggests not all dinosaurs moved at the same time.

So far, scientists have not found any evidence of plant-eating dinosaurs living in the Northern Hemisphere before 215 million years ago. One of the best examples of these is the Plateosaurus, a two-legged, 7-meter-long plant-eater that weighed around 4,000 kilograms.

However, meat-eaters lived worldwide by at least 220 million years ago, said Randy Irmis of the University of Utah. Irmis was not part of the research.

Dennis Kent of Columbia University was the lead writer of the study. The plant-eaters "were late comers in the Northern Hemisphere," he said. Then he asked, "What took them so long?"

By studying the atmosphere and the climate of the time period, Kent believes he has found an answer. During the Triassic period, 230 million years ago, carbon dioxide levels were 10 times higher than now. The Earth was hotter with no ice sheets at the poles and two areas of extreme deserts north and south of the equator, he said.

It was so dry in those areas that there were not enough plants for the plant-eaters to survive. But there were enough insects so that meat-eaters could, Kent said.

About 215 million years ago, carbon dioxide levels dropped. The drop resulted in more plant life in the deserts. The plant-eaters were then able to make the trip. Kent and other scientists said Triassic changes in carbon dioxide levels were from volcanoes and other natural forces. The changes were different from our time, when the burning of coal, oil and natural gas are considered the main causes of climate change.

Kent used changes in Earth's magnetism to find the age of fossils in Greenland. Several outside experts both in dinosaurs and ancient climate said this shows that there was a time difference between the migrations of the two kinds of dinosaurs.

Irmis described Kent's theory about how ancient climate affected dinosaurs as "super cool because it brings it back to contemporary issues." Contemporary is a term that means happening or beginning in recent times.

Hans-Otto Portner of the Alfred Wegener Institute in Germany also was not part of the study. Portner suggested that the study's findings fit with some animals behaviors today.

Paul Sereno of the University of Chicago said that the study makes sense. But, he added, it does have one possible weakness.

Just because researchers have not found evidence of fossils older than 215 million years does not mean there were no plant-eaters in the Northern Hemisphere. The fossils just may not have survived, he noted.

Seth Borenstein reported on this story for the Associated Press. John Russell adapted it for Learning English. Mario Ritter, Jr. was the editor.

hemisphere -- n. a half of the Earth

sheet -- n. a wide, flat surface or area of something

pole – n. either end of the imaginary line around which something (such as the earth) turns