A Class Where Teens Learn Mothering, and Are Mothered

Update Required To play the media you will need to either update your browser to a recent version or update your Flash plugin.
By VOA
2010-5-12 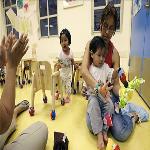 Photo: AP
A teacher's aid at a day care center at a New York City high school in 2007

The twelve or so teenagers who live at the shelter attend parenting classes four days a week. The class is called Mommy and Me.

Teacher Delores Clemens is a mother of five and a grandmother. She teaches basic skills, like how to give a baby a bath and how to dress a baby depending on the season.

She remembers one student who learned from her mother not to pick up a crying baby. The mother said that would only make the child needy and overly demanding.

DELORES CLEMENS: "I said 'That's not true. You have to hold your baby! He is crying for a reason. If you never pick him up, he's going to keep crying. Pick your baby up. Cuddle your baby. Hug him! And she started to doing that. They just want a little cuddling and a little love. And it works! [Laughs]"

Delores Clemens says her students also learn how to be good mothers by letting themselves be mothered.

DELORES CLEMENS: "I'm doing something for them that never has been done for them before."

Around three hundred fifty teenage mothers graduate from Covenant House's Mommy and Me class every year.

In class on this day, with her baby son, is Natasha. She lived on the streets. She is glad not only for the warmth and shelter of Covenant House. As she told reporter Adam Phillips, she is also glad for the help they offer in seeking a more secure life.

NATASHA: "They help you do your resume, your cover letter and everything you need for a job interview, and they help you find a job whatever you're interested in."

REPORTER: "Did you go to high school?"

REPORTER: "Did you graduate?"

NATASHA: "No, I didn't. I was in my last year and then, I got pregnant and I got lazy."

REPORTER: "You look like you are willing to accept responsibility for that."

Some teenage mothers wish they themselves could be children again. Eighteen-year-old Placida knows that feeling. She says being a mom is hard.

PLACIDA: "Because you have to get up every two hours in the middle of the night, and you can't go out and say 'I am going to buy this for myself.' No. I have to buy Pampers, clothes and food. So now it's not only one, Now it's two. So it's very hard."

The World Health Organization says the United States has forty-one births for every one thousand girls age fifteen to nineteen. That is higher than other developed countries, as well as some developing ones. By comparison, northern neighbor Canada has fourteen births and southern neighbor Mexico has eighty-two.