Scientists Search for the Lost City of Atlantis

Update Required To play the media you will need to either update your browser to a recent version or update your Flash plugin.
By Jim Tedder
2011-4-25 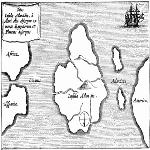 Photo: Getty Images
A map from the late 1600's shows Atlantis in the middle of the Atlantic Ocean

FAITH LAPIDUS: This is SCIENCE IN THE NEWS, in VOA Special English. I'm Faith Lapidus

BOB DOUGHTY: And I'm Bob Doughty. Today, we tell about efforts to find the lost city of Atlantis. We tell about new evidence that human beings began to influence Earth's climate eight thousand years ago. And we tell about a robotic vehicle designed to explore the planet Mars.

FAITH LAPIDUS: Is one of the world's greatest mysteries about to be solved? For years, many people have wondered if a place called Atlantis was real. The ancient Greek philosopher Plato first wrote about Atlantis long ago. If it did exist, where was it?

About two thousand five hundred years ago, Plato wrote about an island near the Pillars of Hercules. He said it was home to great leaders who had unusual powers. They had many ships and were very scientifically developed. He said their land was as big as Libya and Asia together. And then, in one day and one night, a great earthquake caused Atlantis to sink into the ocean, never to be seen again.

Today, scientists know that the Pillars of Hercules was also called the Straits of Gibraltar. It is a narrow waterway that separates southern Spain from North Africa. Two years ago, an American-led team of researchers began searching for Atlantis in this general area. They started with a satellite picture of what looked like an underwater city near Cadiz, Spain. Then they used a special kind of radar to help them see under the ocean floor.

BOB DOUGHTY: Cadiz is about a hundred kilometers from Gibraltar. Plato wrote that Atlantis once faced a city called Gadara. That is the old name for what is now Cadiz. Here the researchers found what seems to be the remains of a sunken city that was built in a circle. That is also how Plato described Atlantis. In this sunken city, the researchers found a stone carving that is thought to be an Atlantean soldier.

University of Hartford archeologist Richard Freund directed the research team. He says he found something interesting farther inland in central Spain. He discovered a series of cities built like Atlantis. He thinks they may have been made by people from Atlantis who escaped the earthquake and waves that covered the area. His work was described in a television program on the National Geographic Channel.

FAITH LAPIDUS: There are many people who think that the search for Atlantis is a waste of time. They say that Plato made up the story. They look at his work as fiction...a good story that was never meant to be taken as true. They also think it was not possible for so large an area to be destroyed in so short a time.

Professor Freund and his team know that many people think Atlantis was never real. But his team plans to continue their research under the sea and in central Spain.

BOB DOUGHTY: The Industrial Revolution of the eighteen and nineteen hundreds was a time of great change for the world. Factories and their machines began to do much of the work that human beings had once done by hand. But many of those machines used coal to provide their power. Pollution of the air and water quickly became a problem.

Many people think that the Industrial Revolution was the first time people began to have a major effect on the earth's ecology. That, they say, was the beginning of climate change. But now, a new report says that humans started these changes thousands of years ago.

Jed Kaplan and Kristen Krumhardt did the research. Both are with the Federal Polytechnic School in Lausanne, Switzerland. They say people began to harm the planet when they began cutting down trees to make farmland and places to live. The Swiss researchers think this could have started eight to ten-thousand years ago.

FAITH LAPIDUS: Trees and plants take in the gas carbon dioxide and give off oxygen. But if a great many trees are cut down, more carbon dioxide rises into the air. That, the scientists say, causes our planet to heat up. This causes climate change, also known as global warming.

In two-thousand three, American William Ruddiman first proposed that global warming resulted from human activities thousands of years ago. The University of Virginia professor even thought that this warming was so great that it helped the earth avoid another ice age. His critics say there were not enough people on earth at the time to cause that much damage. But Professor Ruddiman believes he is right, and so do the Swiss researchers.

Professor Kaplan and Ms. Krumhardt built a model to see how land use changed over time. Their results show that nearly two times the amount of carbon was released into the air thousands of years ago than had been thought. They also made a video so people could see how land use had changed over thousands of years. The video shows the Earth changing from a mostly green color to a planet with large areas of brown.

BOB DOUGHTY: Archeologist Dorian Fuller of University College in London directed another study of climate change. He says the air began to suffer when people first started raising farm animals like cows, goats, horses and pigs. When these animals process food, they produce a large amount of methane. This gas traps even more heat than carbon dioxide. He also says that growing rice in Asia added a large amount of methane to the air.

Some of these findings were presented recently at a meeting of the American Geophysical Union in Santa Fe, New Mexico. Other studies will be presented in the journal "Holocene" later this year.

Other than reducing the levels of these carbon gases, what can we do to help the environment? Scientists agree: plant more trees.

FAITH LAPIDUS: "That is a curiosity! " That is something that people in the southern United States often said when they saw something unusual that could not be explained easily. It also is probably what a number of reporters said earlier this month when they were permitted to see a machine that will be sent to the planet Mars. It is called a rover, and its name is...Curiosity. The reporters saw the machine at the Jet Propulsion Laboratory in Pasadena, California.

The name of this space vehicle came from Clara Ma, a student from Kansas. Two years ago, she won a competition to name the rover. She also plans to be at the launch area in Florida in November when Curiosity is sent on its way. 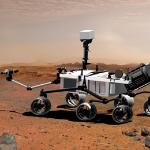 BOB DOUGHTY: The new Mars rover is about the size of a small car. It is about three meters long and weighs over nine hundred kilograms. Curiosity is much heavier than older rovers called Spirit, Opportunity, and Sojourner. The American space agency says it will take Curiosity about ten months to reach Mars. Then it will land, move around on its six large wheels, and begin a number of experiments. Scientists think Curiosity will send information back to Earth for at least two years. They hope it will find signs of life on the "Red Planet."

The space agency has called Curiosity a "rolling laboratory." It will carry ten instruments to test the Martian surface. A laser will be used to break up large objects it finds. It will have a drill to cut open and examine the inside of rocks. There are also cameras that can see long distances. Curiosity even has an arm that can touch things and send the information back to Earth.

FAITH LAPIDUS: The new Mars rover will have a nuclear battery that will enable it to travel great distances. It will not use energy from the sun as in the past. Scientists have not decided exactly where on Mars they will land the vehicle. They are looking for a place that might offer the best chance for finding microbes -- extremely small forms of life. However, they think they have found four such places.

Getting to name the Mars rover was exciting for Clara Ma. Going to the launch will also be special. But there is one more prize that Clara won. Space agency officials are letting Clara sign her name on the bottom of the rover. Now, isn't that a curiosity!

While we are talking about space, here is another piece of news. A company called Space X announced that it will be testing a new rocket next year. It is called the "Falcon Heavy." The company says Falcon Heavy will be the most powerful rocket ever built. It will be able to carry two times more weight than the older Saturn Five rocket. And scientists say that it will be able to carry a spacecraft around the Earth, to the moon, or even to Mars.

BOB DOUGHTY: This SCIENCE IN THE NEWS was written by Jim Tedder. Our producer was June Simms. I'm Bob Doughty.

FAITH LAPIDUS: And I'm Faith Lapidus. Join us again next week for more news about science, in Special English, on the Voice of America.