Scientists in Search of a Common Language With Dolphins

Update Required To play the media you will need to either update your browser to a recent version or update your Flash plugin.
By Mario Ritter and Jim Tedder
2011-3-21 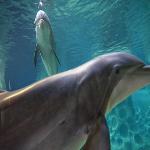 FAITH LAPIDUS: And I'm Faith Lapidus. Today, we tell about efforts by American scientists to communicate with dolphins. We also tell about applications programs for computers, better known as apps. We tell how a sharp increase in demand for apps has affected computer science programs at many universities.

BOB DOUGHTY: People have always been able to talk to animals. The problem is: do they really talk back? And what are they saying? When a dog barks three times, is he really communicating? Or is he hoping to get praise or even food for his actions?

And what about dolphins? Are their squeaks and whistles really communication? Or are they just noises? Scientists have thought for a long time that dolphins have their own language and can "talk" among themselves. But is it possible for them to communicate with us?

FAITH LAPIDUS: Denise Herzing is a biologist with the Wild Dolphin Project in Jupiter, Florida. She has studied the animals for over twenty years. Her latest work involves creating a language that both dolphins and humans can understand.

Members of her team lower a keyboard into the water. Then a diver pushes one of the keys to show the dolphin how it works. When the key is pushed, someone above the water throws a ball to the diver. At the same time, a high frequency whistle is produced. The sound is something that the dolphin can hear, and also make. The dolphin then learns that to get the ball, it can either push the key, or make the whistle sound. The result is real communication between an animal and a human.

BOB DOUGHTY: Ms. Herzing found that young female dolphins like to play this game the most. Young males were not as interested. Another thing she learned was that dolphins played the game best after being "introduced" to humans. Divers first swim with the dolphins in slow, easy movements. They look directly at its eyes. If a dolphin swims one way, the diver does what the dolphin does. After a while, the dolphins become friendly and are ready to play the language game.

FAITH LAPIDUS: At the Dolphin Institute in Hawaii, scientists have taught dolphins hundreds or words. They use hand and body movements, and pictures to teach the dolphins. They found that dolphins could learn the difference between a statement and a question. And they learned that changing the order of words in a sentence can change the meaning.

Scientists at the SETI Institute in California are also interested in communicating with animals. Their job is to listen to sounds coming from outer space that might be signs of life. If they were to find distant life forms, how would they communicate with them? They think using a language like "dolphin talk" may be the answer.

An iPad with many choices of apps

BOB DOUGHTY: Have you ever played a simple video game on a mobile phone? If you have, you are a mobile app user. And you have experienced a small part of a revolution in computing.

People are buying and using mobile apps at an increasing rate in the United States and in other countries. Earlier this year, Apple announced the ten billionth mobile app download from its App Store website. The App Store currently offers about three hundred fifty thousand apps for iPhones and other Apple products.

Google offers apps for its Android mobile operating system through its Android Market. And many companies directly sell apps for use with their products. For example, General Motors has developed an app that gathers information about its new hybrid car, the Chevy Volt.

FAITH LAPIDUS: University professors in computer sciences have a good idea about the growing number of apps that are becoming available. Many professors offer classes in which they guide computer engineering students in building apps. Some of the resulting products have been very creative and gained popularity.

Marc Buchner is an associate professor of computer science and electrical engineering at Case Western University in Cleveland, Ohio. He says apps are really nothing new.

MARC BUCHNER: "Applications, or apps, are really short for application programs. And these are the things that run on computers: your pc's, your macs, and run on mobile devices such as iPhones and Android devices. But they're all programs."

FAITH LAPIDUS: Apps are programs -- a series of instructions or orders for computing devices. When computers only sat in offices, applications were just another word for software programs. But with wireless devices, something changed. Now, you have computing power anywhere you go.

BOB DOUGHTY: Marc Buchner says the way people get apps is also different from earlier methods of getting software. Traditionally, software came on plastic CDs. It also could be downloaded on computers. But the payment process takes time and generally requires a keyboard.

Professor Buchner says he sees three ways in which apps have changed computing. With apps, he says, a user can search for an interesting product and pay for it quickly. Payment is easy and the result is immediate.

Apps are also low cost. Many are free. Others are a few dollars at most.

Marc Buchner adds that an important part of the app revolution is that a lot of people are getting involved in making them.

MARC BUCHNER: "Because these things are so accessible, there are [a] very, very large number of people that are developing apps."

FAITH LAPIDUS: Being able to carry apps anywhere opens new possibilities for computer programmers. An app can be as simple as a program that turns a mobile phone into a flashlight to light your way at night. Or apps can be more complex. They can use satellite positioning information to tell you where you are. Or they can give you directions to the nearest store where you can buy something you want.

Manuel Perez-Quinones is a computer engineering professor at Virginia Tech University. He says it is easy for designers to understand how people will use their apps because they are designed with a clear task in mind. This clear and immediate usefulness provides motivation for many programmers who make mobile apps.

And there is a technical reason for apps popularity among developers.

MANUEL PEREZ-QUINONES: "The other part is on Apple and Google in the case of Android. They've made it really easy to build entry level applications. And a lot of the apps you see on the phones and all these mobile devices are very simple."

Jobs related to apps are also increasing. In January, Google announced plans to employ software developers to help it create more apps for mobile devices. Experts say this is so the Internet search company can compete with Apple.

FAITH LAPIDUS: Yet, mobile apps have not always been loved. Manuel Perez-Quinones says Apple did not want developers building apps for the first iPhone. The idea was that a personal computer, not a phone, was the right place for a computer program. But Apple changed. The company has since become a leader in app sales by providing mobile devices, like the iPod, iPhone and iPad, which use them.

Marc Buchner says there is a lot of energy and excitement in the field of computer apps. He says the combination of useful computing tasks that can be carried everywhere is at the heart of this.

MARC BUCHNER: "It's exciting to be able to expand what you can do with something you are carrying around in your pocket or your purse."

BOB DOUGHTY: This SCIENCE IN THE NEWS was written by Mario Ritter and Jim Tedder. June Simms was our producer. I'm Bob Doughty.

FAITH LAPIDUS: And I'm Faith Lapidus. What would you like in an English learning mobile app if you could have one designed just for you? Tell us at voaspecialenglish.com. Or go to 51voa.com where you can find transcripts, MP3s and podcasts of our programs. Join us again next week for more news about science in Special English on the Voice of America.