The Struggle for a Dependable Test for Alzheimer's Disease

Update Required To play the media you will need to either update your browser to a recent version or update your Flash plugin.
By Jerilyn Watson
2011-2-7 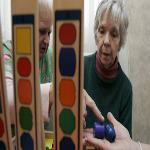 Photo: AP
A patient with dementia, right, works on a puzzle with caregivers at the Morning Glory Retirement Home in State Line, Pennsylvania

FAITH LAPIDUS: Scientists have been attempting for years to learn who may get Alzheimer's disease. If the condition could be identified before its worst signs appear, people might get at least temporary medical help. There is no cure for Alzheimer's, which steals people's ability to care for themselves. But treatment can slow its progress.

BOB DOUGHTY: The most widely held belief about the cause of Alzheimer's is that a protein, beta-amyloid, builds up in patients' brains. Large amounts of this protein may destroy a person's ability to think.

Some scientists question whether beta-amyloid causes Alzheimer's disease. They think that the protein build-up may result from it. But most researchers say thick tangles or plaques of the protein are responsible for the condition. Plaques are unusual clusters, or groups, of proteins. The researchers say beta-amyloid destroys communication links in the brain.

FAITH LAPIDUS: Among older people, Alzheimer's is the most common form of dementia, the loss of abilities needed for normal life. Other mental conditions may seem like Alzheimer's. Those conditions need medical treatment that is different from treatment for Alzheimer's. A correct diagnosis, or identification, is important.

The best way to diagnose the disease has been a medical examination of the brain after a person dies. Doctors say methods to test the living have presented problems, like high costs for widespread use.

BOB DOUGHTY: Public and medical demand for a better way has been strong. Scientists have been working to produce a dependable test for the disease in the living.

The United States' Food and Drug Administration is considering one such method. The method combines an examination by positron emission tomography with a drug that lights up beta-amyloid. The PET device makes scans or images that doctors can read.

FAITH LAPIDUS: Studies have shown that the drug florbetapir can light up beta-amyloid and show it on the images. Florbetapir is a radioactive coloring agent. It connects with plaques in the brain. This makes it possible for doctors to see the plaques.

In January, an expert advisory panel of the FDA debated whether florbetapir was ready for marketing. The group did not suggest that the FDA approve the drug at this time. Still, the experts said they made the judgment based on available information. And they asked for more information. They also set conditions for accepting florbetapir.

BOB DOUGHTY: The Food and Drug Administration will decide next month whether to accept the panel's suggestions. The FDA normally follows the advice of its expert advisers, but not always.

If it is approved, florbetapir would be the first agent permitted to measure plaque deposits in living patients. Still, the presence of plaques does not prove that a patient has Alzheimer's disease. Doctors say some people with amyloid plaques in their brains do not have the condition.

FAITH LAPIDUS: An estimated thirty million people around the world have Alzheimer's disease. In the United States alone, more than five million people suffer from this presently incurable brain disorder.

Alzheimer's affects memory and personality -- those qualities that make a person an individual. At first, people with the condition forget simple things, like where they left the keys to their car. But as time passes, they forget more and more. They may forget what a key is used for.

BOB DOUGHTY: Patients forget the names of their husbands, wives or children. Then they forget who they are.

Finally, they remember almost nothing. It is as if their brains die before the other parts of the body. Victims of Alzheimer's do die from its effects or conditions linked to it. But death may not come for many years.

FAITH LAPIDUS: Dementia is the loss of thinking ability that is severe enough to interfere with daily activities. It is not a disease itself. Instead, dementia is a group of signs of some conditions and diseases.

Some kinds of dementia can be cured or corrected. This is especially true if they result from drugs, infection, sight or hearing problems, head injury, and heart or lung problems. Other kinds of dementia can be corrected by changing levels of hormones or vitamins in the body. However, brain cells of Alzheimer's victims die. They cannot be replaced.

BOB DOUGHTY: Victims can become angry and violent as the ability to think and remember decreases. They sometimes shout and move with no purpose or goal. Or they may become very quiet.

Media reports tell about older adults found walking in places far from their homes. They do not know where they are or where they came from. These people often are suffering from Alzheimer's disease.

FAITH LAPIDUS: Alzheimer's generally develops differently in each person. Yet some early signs of the disease are common. The victims may not recognize changes in themselves. They may struggle to hide them.

Probably the most common early sign is short-term memory loss. The victim cannot remember something that happened yesterday, for example. Also, victims of the disease have increasing difficulty learning and storing new information. Slowly, thinking becomes much more difficult. The victims cannot understand a joke, or cannot cook a meal, or perform simple work.

BOB DOUGHTY: Another sign of the disease is difficulty solving simple problems. Alzheimer's patients might not know what to do if food on a stove is burning. Also, people have trouble following directions or finding their way to places they have known all their lives.

Yet another sign is struggling to find the right words to express thoughts or understand what is being discussed. Finally, people with Alzheimer's seem to change. Quiet people may become noisy and aggressive. They may easily become angry and lose their ability to trust others.

Alzheimer's is identified in only about two percent of people who are sixty-five. But the risk increases to about twenty percent by age eighty. By eighty-five or ninety, half of all people are found to have some signs of the disease.

Alzheimer's affects people of all races equally. Yet women are more likely to develop the disease than men. This is partly because women generally live longer than men.

BOB DOUGHTY: Patients cannot fully recover from Alzheimer's. But many can be helped by medicine. That is especially true if the disease is found early.

The FDA has approved two kinds of drugs for Alzheimer's. Most are called cholinesterase inhibitors. A doctor must order these medicines for patients. Cholinesterase inhibitors may work by protecting a chemical messenger needed for brain activities. They are meant to treat memory, thinking, language, judgment and other brain activity. Doctors order them for mild to moderate cases of the disease.

FAITH LAPIDUS: The second kind of drug has a long name. It is represented by the drug memantine. This medicine seems to work by governing the activity of a chemical involved in information processing, storage and memory. It treats patients with moderate to severe Alzheimer's.

BOB DOUGHTY: The British writer Iris Murdoch died of Alzheimer's disease. She said it was a dark and terrible place. In nineteen six, a German doctor, Alois Alzheimer, told about a dementia patient whose brain was studied after death. Her brain had sticky structures and nerve cells that appeared to be mixed together. Now, more than one hundred years later, scientists are still trying to find the causes and treatment of Alzheimer's disease.

FAITH LAPIDUS: This SCIENCE IN THE NEWS was written by Jerilyn Watson. I'm Faith Lapidus.

BOB DOUGHTY: And I'm Bob Doughty. Join us again next week for another SCIENCE IN THE NEWS in VOA Special English.