Update Required To play the media you will need to either update your browser to a recent version or update your Flash plugin.
By Shelley Gollust
2011-3-26 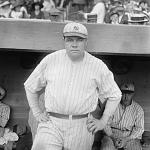 DOUG JOHNSON: And I'm Doug Johnson with the Special English program, PEOPLE IN AMERICA. Every week we tell about a person important in the history of the United States. Today, we tell about Babe Ruth, America's greatest baseball player. Some say he was the greatest sports hero of all time.

SHIRLEY GRIFFITH: George Herman Ruth was born in Baltimore, Maryland in eighteen ninety-five. George's parents owned a bar where people came to drink alcohol. His mother died when he was very young. His father was killed in a street fight.

Young George was forced to live on the streets of Baltimore. He stole things. He fought with other children. He got into trouble. At the age of eight, he was sent to live at Saint Mary's industrial school for boys. Catholic religious workers operated the school. The religious workers helped George to act better. And they taught him how to play baseball.

DOUG JOHNSON: By the age of eighteen, George was an excellent baseball player. In nineteen fourteen, a teacher at the school wrote to a friend of his, Jack Dunn. Dunn was the manager of the Baltimore Orioles minor league baseball team. He was the one who decided who would play for the team. The teacher invited Dunn to see the young player.

Jack Dunn had to take responsibility for the boy or George could not leave the school. Dunn decided to become George's legal parent.

SHIRLEY GRIFFITH: That year, the Boston Red Sox baseball team bought the right to make Babe Ruth a player for their team. Ruth pitched for the Red Sox teams during the next two years. He became the best pitcher in the American baseball league. Then the Red Sox discovered that he could hit the ball even better than he could throw it. So Ruth became an outfielder instead of a pitcher. In nineteen nineteen, he hit the ball out of the baseball park twenty-nine times. He hit more home runs than any other player that year.

DOUG JOHNSON: In nineteen twenty, the Red Sox sold Babe Ruth's contract to the famous New York Yankees baseball team. That year, Babe Ruth hit fifty-four home runs. This was more home runs than any other American League team hit that season. The next year, he hit fifty-nine home runs. Babe Ruth's baseball skill and friendly nature made him famous across the country and around the world. 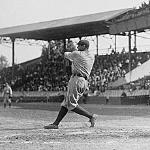 Many people came to the Yankee games just because they wanted to see Babe Ruth play. He helped the team earn a great deal of money. The Yankees built a new baseball stadium in nineteen twenty-three. It was known as "The House that Ruth Built. "

SHIRLEY GRIFFITH: Baseball fans loved Babe Ruth because he was what some people called "larger than life. " Sports writer Paul Gallico wrote that Babe Ruth played ball in the same intense way that he lived his life. Gallico said that whenever Ruth hit a ball out of the baseball park the fans would become so excited that they were ready to break the seats. It was impossible to watch Ruth swing his bat without experiencing a strong emotion. In fact, in nineteen twenty, a man reportedly died of excitement while watching Babe Ruth hit a home run.

The name of Babe Ruth appeared so often in the newspapers that sports writers thought up new names for him. They called him "The Sultan of Swat." "The King of Clout." "The Babe. " They called him "Bambino." Sometimes they shortened that name to "Bam. "

DOUG JOHNSON: Babe Ruth led the New York Yankees to seven championships, including four World Series titles. He hit more home runs than any other baseball player. In nineteen twenty-seven, he hit sixty home runs. During his lifetime, he hit a total of seven hundred fourteen home runs. Before he became a power hitter, he had been among the best pitchers of his time. All these skills made Babe Ruth the greatest player baseball has ever had.

In nineteen thirty, Ruth earned eighty thousand dollars. This was more money than the president of the United States, Herbert Hoover, earned that year. Reporters asked Ruth why he should be paid more than President Hoover. Ruth reportedly said: "Why not? I had a better year than he did."

Ruth also earned money by permitting his name to be used on many products. A candy bar was named after him. "Baby Ruth" candy bars still are popular today.

SHIRLEY GRIFFITH: Sometimes, Babe Ruth got into trouble on the baseball field. He often arrived late. He got angry often. He hit a baseball umpire. He had many disputes with the chief baseball official.

In nineteen twenty-one, the Yankees' manager suspended Ruth from playing. The next year, Ruth did the worst thing a baseball player could do. He left the field during a game to chase a fan who said something he did not like. He had to pay five thousand dollars for violating the rules.

DOUG JOHNSON: Babe Ruth also got into trouble off the baseball field. He was a very large man who liked to have a good time. He ate too much. He drank too much alcohol. He played cards and lost money. He went to nightclubs. He drove his car too fast.

Some people were unhappy about the way he acted. In nineteen twenty-two, New York State Senator Jimmy Walker appealed to Babe Ruth at a dinner of the baseball writers association. Mr. Walker asked the great baseball star to be a better example to the children of America. Babe Ruth stood up with tears running down his face. He promised he would be a better person. He kept his promise. He was never in trouble again.

SHIRLEY GRIFFITH: Yet Babe Ruth continued to eat too much. In nineteen twenty-five, he was returning on a train from baseball spring training in the South. He became hungry. He stopped at a train station. He reportedly ate twelve hot dog sandwiches. He drank eight bottles of soft drink.

Ruth developed severe stomach problems. He was taken to a hospital in New York. Babe Ruth was so sick that doctors had to operate on him. He was in the hospital for seven weeks. Many Americans worried about him until he got well.

DOUG JOHNSON: Babe Ruth loved children. In nineteen twenty-six, a child named Johnny Sylvester lay in a hospital bed. He was very weak after an operation. His doctor thought that a visit from Johnny's hero might help the boy get better. So Babe Ruth came to the hospital. He wrote his name on a baseball and gave it to Johnny. He promised to hit a home run that afternoon for the boy. Babe Ruth kept his promise. In fact, he hit three home runs that day.

SHIRLEY GRIFFITH: There are many stories about Babe Ruth and his life. Experts do not agree about which ones are true. The most famous story about him concerns the nineteen thirty-two World Series championship game. The Yankees were playing the Chicago Cubs in Chicago. Ruth was at bat getting ready to hit. The Cubs and their fans were trying to make Ruth angry. They insulted him. Ruth swung his bat and missed the first pitch. The crowd laughed at him. Ruth swung and missed the second pitch. The crowd made more noises. Then Ruth pointed his bat at the seats past the center field of the ball park. He showed the crowd where he would hit the next ball. And that was exactly where he hit the ball out of the park.

DOUG JOHNSON: Ruth stopped playing baseball in nineteen thirty-five. The next year he was one of the first five players to be elected to the Baseball Hall of Fame. After he retired as a player, he wanted to be manager of a baseball team. But no such position was offered to him. Ruth died in nineteen forty-eight of throat cancer. He was fifty-three years old.

Babe Ruth is buried near New York City. People still come to visit his burial place. They leave things there: A Yankees baseball hat. A small American flag. A baseball. Americans leave these things to show that they have not forgotten the Babe.

SHIRLEY GRIFFITH: This Special English program was written by Shelley Gollust. It was produced by Lawan Davis. I'm Shirley Griffith.

DOUG JOHNSON: And I'm Doug Johnson. Listen again next week for another PEOPLE IN AMERICA program on the Voice of America.