Update Required To play the media you will need to either update your browser to a recent version or update your Flash plugin.
By George Grow
2010-8-7

Photo: loc.gov
Claire Boothe Luce became famous for her activities in government, the media and the arts

GWEN OUTEN: And I'm Gwen Outen with PEOPLE IN AMERICA in VOA Special English. Today we tell about a woman who became famous for her activities in government, the media and the arts. She was a member of Congress and an ambassador. She was a news reporter and magazine editor. And she wrote plays. Her name was Clare Boothe Luce.

STEVE EMBER: Clare Boothe Luce was one of the most influential women in modern American history. Yet she came from simple roots. She was born in New York City in nineteen-oh-three. Clare's father was a musician and businessman. Her mother had been a dancer.

While Clare was a girl, her parents ended their marriage. She and her brother stayed with their mother. Their mother did not have a lot of money. Yet she was able to send Clare to very good schools. Her mother then married a doctor from Connecticut. Clare's stepfather, Albert Austin, later served in the United States House of Representatives.

GWEN OUTEN: As a young woman, Clare Boothe was known for her intelligence and good looks. She met her first husband through a family friend. George Tuttle Brokaw was a wealthy man. He also was more than twenty years older than Clare. They were married in nineteen twenty-three and had one child – a daughter. However, her husband had a problem with alcoholic drinks. Their marriage ended after only six years.

Clare developed a serious interest in writing. In nineteen thirty, a friend, the magazine publisher Conde Nast, offered her a job. She wrote comments for pictures published in Vogue, a magazine for women about clothes and fashion. A short time later, she accepted a job at another magazine, Vanity Fair. She wrote reports about social events and famous people in New York. Later these reports were published in a book. 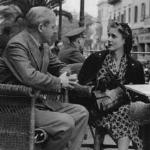 STEVE EMBER: Clare Boothe became a top editor at Vanity Fair. She worked there until nineteen thirty-four. By then, she was also writing plays. One play was called "Abide with Me." It was about a man who mistreats his wife. "Abide with Me" opened in a theater on Broadway in New York City in nineteen thirty-five. Critics hated it.

Two days after the show opened, Clare Boothe married Henry Robinson Luce. He was a famous and important magazine publisher. He published Time and Fortune magazines. She had first met Henry Luce at a party in New York. At the time, he was married and had two children. He and Clare were married a short time after a court order canceled his first marriage. They would stay together for more than thirty years.

GWEN OUTEN: Clare Boothe Luce returned to writing plays. Her second play, "The Women," made fun of rich women. It opened on Broadway in nineteen thirty-six. The show was very popular. It was later made into a movie. Another play, "Kiss the Boys Goodbye," also was a success. So was her next play, "Margin for Error." All three plays were noted for their use of sharp language and making fun of human failings.

Clare Boothe Luce was known for expressing her opinions. Her most famous saying was: "No good deed goes unpunished." She often spoke about the problems of women trying to succeed in a world mainly controlled by men. She said: "Because I am a woman, I must make unusual efforts to succeed. If I fail, no one will say, ‘She doesn't have what it takes.' They will say, ‘Women don't have what it takes.'" She made these comments in a speech to the National Press Club in Washington, D.C.

CLAIRE BOOTHE LUCE: "We women are supposed to be a minority. I've never understood that myself since we outnumber the men in actual numbers, and we live five years longer. So I've never felt like a minority because, as you know, minorities are never supposed to say anything unkind about one another."

STEVE EMBER: In nineteen forty, Clare Boothe Luce traveled to Europe as a reporter for Life magazine, which was published by her husband. She visited a number of countries and later wrote reports about how people were dealing with World War Two. She wrote a book about this called "Europe in Spring." In the book, she noted that people were living in "a world where men have decided to die together because they are unable to find a way to live together." She also reported from Africa, China, India and Burma for Life magazine.

In nineteen forty-two, her stepfather, Albert Austin, died. Mrs. Luce agreed to be the Republican Party candidate for his seat in the House of Representatives from Connecticut. She was elected and entered Congress in January, nineteen forty-three.

Mrs. Luce was a political conservative. She spoke against the administration of President Franklin D. Roosevelt. She criticized the Roosevelt administration's foreign policy. She said it failed to supervise the war effort.

GWEN OUTEN: A tragic event affected Clare Boothe Luce in nineteen forty-four. Her nineteen-year-old daughter Ann was killed in an automobile accident. Mrs. Luce experienced severe emotional problems. She sought help from a number of people, including a Roman Catholic clergyman, the Reverend Fulton J. Sheen. At the time, he was becoming known for his radio broadcasts.

Mrs. Luce demanded to know why God had taken her daughter. Reverend Sheen said the young woman had died so that her mother could learn about the meaning of life.

Mrs. Luce recovered and returned to Congress. She remained popular among the voters of Connecticut and was re-elected to a second term in office. However, she did not seek re-election in nineteen forty-six. Mrs. Luce said she wanted to spend more time with her husband. She also became a member of the Roman Catholic Church.

Mrs. Luce returned to writing. She also edited a book about people considered holy by the Roman Catholic Church. 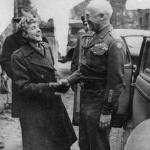 In nineteen fifty-two, she supported the Republican Party's candidate for president, former General Dwight Eisenhower. He won the election and appointed Mrs. Luce as ambassador to Italy. She became one of the first American women to serve in a major diplomatic position. Mrs. Luce served as the ambassador until nineteen fifty-six. She left Rome after becoming sick with arsenic poisoning caused by paint particles in her bedroom.

GWEN OUTEN: Three years later, President Eisenhower nominated Mrs. Luce as ambassador to Brazil. Most members of the United States Senate supported her nomination. However, some senators were opposed. Among them was Wayne Morse, a Democrat from Oregon.

The Senate approved Mrs. Luce as the new ambassador. After the debate, she said that Senator Morse's actions were the result of him being "kicked in the head by a horse." Many Democrats criticized her comment. A few days later she resigned as ambassador.

Mrs. Luce remained active in politics. In nineteen sixty-four, she supported Senator Barry Goldwater as the Republican Party's candidate for president. She also announced plans to be the Conservative Party candidate for the Senate from New York. However, Republican leaders disapproved and she withdrew from the race.

STEVE EMBER: Clare Boothe Luce retired from public life. She and her husband moved to Phoenix, Arizona. Henry Luce died there in nineteen sixty-seven. He was sixty-eight years old.

Mrs. Luce moved to Honolulu, Hawaii. She lived there until the early nineteen eighties. During that period, she served as an advisor to three presidents. She was a member of the President's Foreign Intelligence Advisory Board.

Then Mrs. Luce moved to Washington, D.C. In nineteen eighty-three, President Ronald Reagan awarded her the Presidential Medal of Freedom. That is the highest honor a president can give to an American citizen.

STEVE EMBER: Clare Boothe Luce had a long battle with cancer. She died at her home in nineteen eighty-seven. She was eighty-four years old. She was buried near the remains of her husband in the state of South Carolina.

Experts said Clare Boothe Luce had enough important jobs in government, the media and the arts to satisfy several women. She was often on the list of the ten most important and admired women in the world.