Update Required To play the media you will need to either update your browser to a recent version or update your Flash plugin.
By Dana Demange
2011-9-20 BARBARA KLEIN: Eugene Nida was a language expert, a Baptist religious worker, and a Bible historian. He worked for the American Bible Society for fifty years. Mr. Nida is widely considered the father of modern Bible translation. He helped translate the world's most popular book, the Bible, into two hundred languages.

Eugene Nida was born in Oklahoma City in nineteen fourteen. He studied two ancient languages, Greek and Latin, in college, then completed a master's degree program in New Testament Greek. He later received a doctorate degree from the University of Michigan in linguistics. Mister Nida began working for the American Bible Society in nineteen forty-three. That same year, he also became a Baptist clergyman. 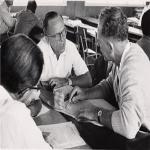 Eugene Nida sits at center in this photograph from the American Bible Society.

MARIO RITTER: Eugene Nida was known for developing a new method of Bible translation, called "functional equivalence." He believed that language in Bible translations had to be understandable and culturally meaningful to the people reading them. Before Mr. Nida, different language versions of the Bible were mainly the product of western religious workers. The workers often had limited knowledge of other languages. So their translations were often based on an exact word-by-word translation.

Mr. Nida developed Bible translations that honored the original Greek and Hebrew writings. But they also sounded natural and made use of a culture's own linguistic expressions.

BARBARA KLEIN: Mr. Nida traveled all over the world, teaching native translators about his method. He believed that translation was impossible without cultural understanding. One of his most difficult projects involved producing an Inukitut version of the Bible. Inukitut is the language of the Inuit people who live in the Arctic area. This project lasted twenty-four years.

The Bible is filled with stories that take place in warm places, often with deserts. Biblical stories involve animals like camels, donkeys and sheep. Yet the Inuit Bible had to be understood by a people who live in a climate of snow and ice. The animals they knew were walruses and seals.

Mr. Nida also learned that, in parts of Africa, sheep are considered damaging and problematic animals. So, Bible stories about sheep and shepherds had a very different meaning there than in the west.

Eugene Nida died on August twenty-fifth at the age of ninety-six. In all, he wrote more than forty books about languages, translations, and Biblical studies. He once said that it did not matter in what language a person reads the Bible. He said the goal was to "read it, understand it, and be transformed by its message."

BARBARA KLEIN: Betty Skelton was often called "The First Lady of Firsts" because of the many records she set. She grew up in Pensacola, Florida, watching airplanes flying to and from a nearby navy base. As a child, she persuaded her parents to let her take flying lessons. By twelve, Betty made her first flight alone, although she was not legally permitted to do so until she turned sixteen. By sixteen she earned a permit to fly a plane and, two years later, received a commercial license.

MARIO RITTER: During the nineteen forties, female pilots were mostly barred from commercial and military flying. So Betty Skelton decided to use her flight skills in aerobatics, performing difficult turns, drops, and other exercises. She began performing and competing around the country.

She won the International Feminine Aerobatic Championship for three years in a row, starting in nineteen forty-eight. She and her little Pitts Special plane the "Little Stinker" became famous. BARBARA KLEIN: Dorothy Cochrane is an aviation expert at the Smithsonian Institution's National Air and Space Museum in Washington D.C. She has studied and worked with Betty Skelton.

DOROTHY COCHRANE: "Betty was such a wonderful aerobatic pilot that she really set the bar high for other women to follow behind her and she was a great role model for them. She really was as good as some of the men."

BARBARA KLEIN: Ms. Cochrane says Betty Skelton flew during a period when men and women aerobatic pilots competed separately. And she set the example when later women did compete and win against men.

DOROTHY COCHRANE: "She also became the first woman to perform the inverted ribbon cut. And that's a very tricky thing to do."

BARBARA KLEIN: This flying trick involved using her plane's propeller to cut a ribbon held between two tall sticks. Betty Skelton did this while flying about three meters off the ground—upside down.

MARIO RITTER: Once Ms. Skelton had made her mark flying, she moved on to racecars. She became the first female test driver in the racecar industry. She set several land speed records. She also set a cross-country record, driving from New York to California in under fifty-seven hours. And, she became one of the top women advertising experts working with General Motors in support of the company's Corvette car.

DOROTHY COCHRANE: "She loved speed, that's part of who she was and that was part of her attraction to aviation. And then when she did all she could in aviation, she moved on to automobiles. She still had a beautiful red corvette that she was driving around the retirement community that she lived in, passing some of the golf carts that other people were driving."

MARIO RITTER: Ms. Skelton died in August at the age of eighty-five. Visitors to the Washington area can see her "Little Stinker" plane at the Smithsonian Museum's Steven F. Udvar-Hazy Center in Chantilly, Virginia. The small red and white plane hangs high in the air above the entrance to the museum. And as its former owner would have liked, the plane is hanging upside down.

BARBARA KLEIN: Michael Hart is widely credited as the inventor of the first electronic book, or e-book. He also helped create Project Gutenberg, the first and largest free library on the Internet.

Mr. Hart was born in nineteen forty-seven in Tacoma, Washington, but grew up in Illinois. His father was a professor of Shakespearian literature and his mother was a mathematician.

MARIO RITTER: Michael Hart first became interested in the idea of information sharing while studying at the University of Illinois in the early nineteen seventies. He had permission to use the university's mainframe computer. This huge machine was connected to a network of other computers. He later estimated that the time given to him on the computer network was worth about one hundred million dollars. So, he wanted to come up with a project that was valuable enough to justify the cost of the technology.

This event marked the beginning of Project Gutenberg. Over the next ten years, Mr. Hart added the Bible, William Shakespeare's plays and other texts to the project's storage system.

MARIO RITTER: Mr. Hart said the goal of Project Gutenberg was to support the creation and spreading of e-books free of cost to computer users. He said this effort aimed to "break down the bars of ignorance and illiteracy.

Greg Newby is the head of the Project Gutenberg Literary Archive Foundation. He says Mr. Hart's philosophy behind the project was about helping people.

BARBARA KLEIN: Michael Hart once said that the Gutenberg Project represented a complete system change. It lets a person share his or her favorite book with millions of people.

GREG NEWBY: "Michael really was someone that sacrificed the ability to have what probably would have been a successful and, if he desired traditional career, to electronic books and to these principles of literacy and freedom of access to information."

BARBARA KLEIN: Mr. Hart died earlier this month at the age of sixty-four. He once told a newspaper that there were only two things in the world that were truly free and in endless supply. He said these were the air we breathe and the texts on Project Gutenberg.