Update Required To play the media you will need to either update your browser to a recent version or update your Flash plugin.
By Dan Novak
11 September 2021


A growing number of Americans are questioning the value of four-year college degrees as the prices of higher education rise. Many argue that students are left with deep debts and no clear path to jobs.

The Gallup research company questioned American families about the issue in November and December 2020. It reported that 46 percent of the families said they would prefer their child do something else than go to college—even if there were no financial barriers.

Investing in a college degree will usually earn a good return, according to the New York Federal Reserve, the state's central bank. Its data shows that people with college degrees will earn on average 14 percent more money than they spent on college.

The average earnings for four-year degree holders is about $78,000 per year compared to $45,000 for those with only high school diplomas, the bank reported.

"On average" does not mean that the return on college education will always be a gain. Where a student attends school, how much debt they collect and the field of study they choose help determine their investment return. And the race, ethnicity and sex of the student can influence all of that.

Here are some of the ways college can turn out to be a good financial decision—or not:

Student loan debt is hard to avoid and harder to repay. College costs in the United States rose 117 percent from 1985 to 2019, federal data shows. Wages, however, have only risen 19 percent over that same time.

Loans are still the main way for most students to pay for college. In order to make the degree worthwhile, a student will have to earn enough money to pay back lenders. A manageable student loan payment is about 10 percent of after-tax income.

That is why it is so important to graduate. A lot of debt and no degree is the worst outcome for a college student. 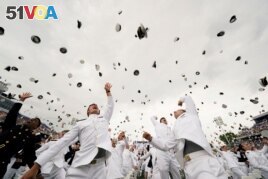 Some fields of study are more profitable than others.

Average earnings at the middle stage of someone's career are highest among those who hold a bachelor's degree in the science, technology, engineering and math fields. Those workers earn $76,000 per year on average, says the Georgetown University's Center for Education and the Workforce. That is followed by people who studied business ($67,000) and healthcare ($65,000).

In May 2020, the Thomas B. Fordham Institute released a study on college graduates' earnings. The research and policy group found that people in cities earned higher wages than people living in less populated areas.

John Winters is an economics professor at Iowa State University and led the study.

"In general, college degrees are a good investment, but the return in terms of cosmopolitan areas is phenomenal," he said.

In cities, bachelor's degree holders earn $95,229 on average. Winters says that is because cities have more jobs that require four-year degrees—fields like technology, finance or marketing. Workers in these fields earn higher wages.

In some ways a college degree can make income and racial inequalities worse. Poorer students will have a harder time repaying debt, adding to their economic struggles, said Marshall Anthony Jr. He is with the Center for American Progress.

Black students often have greater amounts of debt. They have about $25,000 more, on average, than white borrowers. The Brookings Institution found that four years after graduation, Black Americans have $52,726 in student loan debt. White graduates have $28,006. Higher debt and lower wages also means Black borrowers will have more interest over time.

"A college degree doesn't usually work the same for everybody," Anthony said.

Anna Helhoski reported this story for NerdWallet and The Associated Press. Dan Novak adapted for VOA Learning English. Caty Weaver was the editor.

question — v. to ask (someone) questions about something

diploma — n. a document which shows that a person has finished a course of study or has graduated from a school

certification — n. official approval to do something professionally or legally

according to— preposition as stated, reported, or recorded by (someone or something)

determine — v. to officially decide (something) especially because of evidence or facts : to establish (something) exactly or with authority

manageable — adj. easy to control or deal with

cosmopolitan – adj. having people from many different parts of the world

phenomenal — adj. very good or great : unusual in a way that is very impressive

interest — n. the money paid by a borrower for the use of borrowed money