Update Required To play the media you will need to either update your browser to a recent version or update your Flash plugin.
By Dan Friedell
25 April, 2016


Music lovers are remembering one of Africa's greatest musicians.

The Congolese music star Papa Wemba died on Sunday after collapsing at a music festival in Ivory Coast. He was 66.

The cause of death was not immediately known. 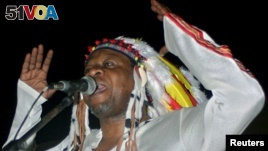 Congolese rumba music legend Papa Wemba died on Sunday at the age of 66.

Papa Wemba was a major force in African music for over 40 years. He is known around the world as the king of Congolese rumba.

Wemba was born in 1949 in what was then known as the Belgian Congo. His given name was Jules Shungu Wembadio Pene Kikumba.

He began his career singing in religious choirs. He was known for being able to sing high notes.

He rose to fame in the late 1960s and early 1970s. At the time, he performed with the band Zaiko Langa Langa in the city of Kinshasa.

The group produced a series of hits involving a guitar-based mix of Latin and African music.

Papa Wemba had fans across Africa and Europe. He worked with other music stars, including former Genesis lead singer Peter Gabriel. Gabriel featured the king of Congolese rumba on his Secret World tour in the 1990s.

The Congolese culture minister called Wemba's death "a great loss for the country and all of Africa."

Were you a fan of Papa Wemba? What will you remember about his music? We want to know. Write to us in the Comments Section or on 51VOA.COM.

choir – n. a group of singers especially in a church