Update Required To play the media you will need to either update your browser to a recent version or update your Flash plugin.
By Bruce Alpert
23 April, 2016


The number of Mexican migrants blocked from crossing the U.S. border in 2015 was at its lowest level in nearly 50 years.

The information comes from reports by the Pew Research Center and the U.S. Customs and Border Protection Agency.

The border agency and the Obama administration give two reasons for the low numbers: Better border security and an improved economy in Mexico. 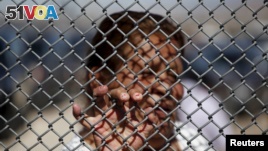 A Mexican migrant talks to a family member through the border fence between Ciudad Juarez and El Paso, United States, after a bi-national Mass in support of migrants in Ciudad Juarez, Mexico, Feb.15, 2016. (REUTERS/Jose Luis Gonzalez)

"The nation's long-term investment in border security has produced significant and positive results," said the border agency in a statement. It points to more border agents, and increased use of airplanes, including drones.

That makes crossing the border illegally much more difficult, the agency said.

But only 35 percent of Republicans share this view of immigration, Pew researchers said. Overall, Pew said that 59 percent of Americans believe immigration is good for the United States.

On Monday, the Supreme Court heard arguments over a lawsuit that seeks to block an Obama administration order allowing about 4 million undocumented immigrants to stay in the U.S. and get work permits.

President Barack Obama said the U.S. government cannot deport all 11 million undocumented immigrants. He said his policy keeps people with family ties in the United States, while allowing them to work legally and support their families.

But Supreme Court Justice Anthony Kennedy said during arguments Monday that such a decision should be made by Congress, not the president acting alone.

The court may be divided 4-4 on the case. If the court is divided, it would let stand a lower court ruling saying the Obama administration does not have the power to keep 4 million people free from deportation.

Numbers Blocked at Mexican Border Down

According to the U.S. Customs and Border Protection Agency, 188,122 "apprehensions" of Mexican migrants were made in 2015. That is 18 percent fewer than in the year before. And, it is the lowest number since 1969.

An apprehension takes place each time people are stopped from crossing the border and entering the United States.

Apprehensions from other countries decreased by an even larger percentage in 2015. They were down 68 percent, according to the border control agency.

Candidates have put forward their positions on immigration

Immigration is an important issue in the U.S. presidential race.

The three Republican candidates for president said enforcement is not nearly tough enough. Businessman Donald Trump said he would build a wall along the U.S. border with Mexico and have Mexico pay for it. He also said he would remove all 11 million undocumented immigrants in the U.S.

Republican Senator Ted Cruz of Texas has not joined Trump in calling for deporting all illegal immigrants. Instead, he has proposed filing criminal charges against people who stay past their visa deadlines and allow U.S. state governments to enforce immigration laws.

Ohio Governor John Kasich, another Republican candidate, has called for better enforcement. However, he supports a program that would permit the millions of people in the United States illegally to gain legal status so they can work.

Democratic candidates, former U.S. Secretary of State Hillary Clinton and Senator Bernie Sanders of Vermont support a different policy. They have said they would like a path toward U.S. citizenship for undocumented immigrants.

undocumented – adj. not having official documents

deadline – n. a date or time when something must be finished