Update Required To play the media you will need to either update your browser to a recent version or update your Flash plugin.
By Christopher Jones-Cruise
20 April, 2016


The Secretary-General of the U.N. has always been chosen in private meetings. But for the first time in its 70-year history, part of the selection process is taking place in public.

At least eight countries have nominated candidates for the position.

Several candidates are women, including Irina Bukova of Bulgaria, Susana Malcorra of Argentina and Helen Clark from New Zealand.

Part of the process of choosing a new United Nations secretary-general is being made public this year. Several women are being considered this time.

All member states were permitted to ask the candidates questions during two hour-long meetings last week in the U.N. General Assembly. The candidates were also asked some of the 1,000 questions written by people on social media.

The U.N. Security Council will examine the candidates' backgrounds. Then the 15 members will mark ballots secretly until one person is chosen.

The General Assembly will then vote on whether to accept the choice.

Britain, China, France, Russia and the United States are the five permanent members of the Security Council. Experts say they are likely to have more influence on who will be the new secretary-general than the 10 non-permanent nations on the council. 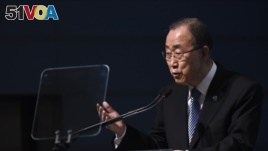 United Nations Secretary-General Ban Ki-Moon speaks at the Forced Displacement: A Global Development Challenge panel discussion during the World Bank/IMF Spring Meetings, April 15, 2016, at the World Bank in Washington. The next secretary-general will have to deal with these and other difficult issues.

The U.N. has a tradition of choosing its new leader from a part of the world different from its current leader.

U.N. Secretary-General Ban Ki-moon is from Asia. The previous U.N. chief was Kofi Annan, who was from Africa.

Dan Thomas is a spokesman for the president of the General Assembly. He says there is no rule that says where a new secretary-general must come from. But most observers say the new U.N. chief will not be from Asia or Africa.

Ban took office in January, 2007. His first term ended in December, 2011. He was elected to a second, five-year term, which ends at the end of this year.

U.N. chiefs can be reelected for an unlimited number of terms. But no one has ever served more than two terms. Annan served for two terms. Before him, Boutros-Boutros Ghali served for just one term because the United States vetoed a second term.

Eastern European countries want the new U.N. chief to be from their part of the world. Six countries from the region have nominated candidates: Bulgaria, Croatia, Macedonia, Moldova, Montenegro and Slovenia, and seven of the nine candidates are from Eastern Europe. None of the U.N.'s eight leaders has been from Russia or Eastern Europe.

A group of 56 countries says the next U.N. chief should be a woman. There have been eight U.N. chiefs. None of them was a woman.

The U.N. says the secretary-general is "equal parts diplomat and advocate, civil servant and CEO."

Some experts say it is not clear if the organization needs a good manager or a strong leader. Some diplomats say a strong leader is needed because of the unrest in many parts of the world. This includes the largest displacement of civilians since World War II, the growing threat of global terrorism and the effects of climate change.

advocate – n. a person who argues for or supports a cause or policy