Update Required To play the media you will need to either update your browser to a recent version or update your Flash plugin.
By Jim Dresbach
22 April, 2016


The Indian government has launched an effort to recover a priceless diamond from Britain.

The Koh-i-Noor diamond was given to Britain's Queen Victoria as a present in 1850, when India was a British colony. The diamond is now kept as part of the Crown Jewels in the Tower of London.

Ownership of the Koh-i-Noor was the subject of a hearing this week in India's highest court. 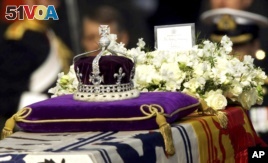 FILE - The Koh-i-noor, or "mountain of light," diamond, set in the Maltese Cross at the front of the crown made for Britain's late Queen Mother Elizabeth.

Solicitor General Ranjit Kumar told the Supreme Court Monday that the diamond belonged to Great Britain. "It was given to the British as compensation for help in the Sikh Wars," he said. "The Koh-i-Noor is not a stolen object."

His comments shocked many Indians.

Media reports say India, Pakistan, Iran and Afghanistan have each tried to claim ownership of the Koh-i-noor. In recent years, the four nations have demanded its return from Britain.

The mother of Queen Elizabeth II wore the diamond in her crown prior to her death in 2002.

The name Koh-i-Noor means "Mountain of Light" in Persian. Several media sources reported the diamond to be worth as much as $200 million.

VOANews reported on this story. Jim Dresbach adapted the report for Learning English. George Grow was the editor.

amicable – adj. showing a polite and friendly desire to avoid disagreement and argument

manner – n. a way in which something is done

crown – n. an object shaped like a circle that is worn on the head of a king or queen