Update Required To play the media you will need to either update your browser to a recent version or update your Flash plugin.
By Dan Friedell
21 April, 2016


It is not just Volkswagen trying to manipulate testing of its cars. This time it is a Japanese company, Mitsubishi. 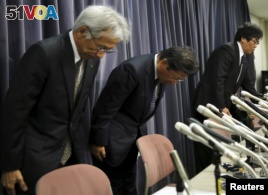 The more air in a tire, the better it will perform on a fuel economy test. The test recorded 10 percent better fuel economy than consumers were seeing on the road.

The cheating affects over 600,000 cars produced for Mitsubishi and Nissan. The models are the eK and Dayz Roox passenger cars.

The Japanese government promised to deal with Mitsubishi in a "strict manner."

Mitsubishi's stock price dropped significantly on Wednesday and Thursday after the news of an investigation came out.

Dan Friedell adapted this story for Learning English based on reporting by VOANews . Hai Do was the editor.

What do you think about the cheating by Mitsubishi? We want to know. Write to us in the Comments Section or on 51VOA.COM.

strict – adj. demanding that people obey rules or behave in a certain way

efficiency – n. the ability to do something or produce something without wasting materials, time, or energy : the quality or degree of being efficient

manipulate – v. to deal with or control (someone or something) in a clever and usually unfair or selfish way