Update Required To play the media you will need to either update your browser to a recent version or update your Flash plugin.
By Jonathan Evans
01 May 2020


During World War I, posters saying "Food will win the war" urged Americans to grow their own food in what became known as victory gardens. More than 100 years later, home gardeners are returning to that idea in the fight against a pandemic.

The spread of the new coronavirus raises fears about problems with food supplies and the cost of food in a weak economy. So, many gardeners are coming together to learn and share stories on how to grow vegetables, fruits and flowers.

Creating a victory garden now can be a shared experience during hardship and uncertainty. 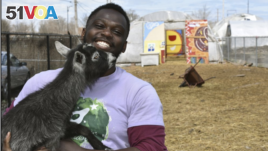 This April 10, 2020 photo shows Marshall Mitchell, Urban Farm Assistant at the Urban Growers Collective farm in Chicago. The nonprofit teaches young kids and others to grow vegetables at eight urban farms around the city. (Laurell Sims via AP)

Rose Hayden-Smith is a historian and author of the book, "Sowing the Seeds of Victory: American Gardening Programs of World War I." She told the Associated Press that the current time is a lot like it was during World War I. "Not only was there a war, but there was an influenza pandemic," she said.

Now, gardeners new and old are getting online and on social media to post pictures of their backyards, gardens, or seeds growing under electric lights. Facebook groups like Victory Garden 2020 or Victory Garden Over COVID-19 are filling up.

Some of these gardeners are newly unemployed. Others are working parents at home with their children. Some are gardening fans who never had the time to explore their interest. Urban community gardeners are increasing production to feed families who have lost income or children who no longer get meals at school.

In New York City, Jennifer McShane had to close her drinking establishment because of the COVID-19 spread there. She has been eating mostly frozen vegetables. She is concerned about buying fresh produce from a grocery store. But she knew how to plant herbs in containers in her home. So she bought some tomato seeds, planted them and called them "Seeds of Hope."

"I can't wait for the plants to come in because I am desperate. The things I am missing are the fresh things," she said.

A common reason to grow vegetables during WWI was a limited food supply. Hayden-Smith explained that America was sending food to European allies and American troops. Victory gardens also were a way to assimilate America's many new immigrants through a patriotic and community-building effort.

Hayden-Smith considers social media posts about gardening during the pandemic as modern versions of the victory garden poster.

"We don't have poster art, but we have Instagram," she said.

In Chicago, a nonprofit group called Urban Growers Collective teaches children and others to grow vegetables at eight urban farms around the city. Their spring educational programs are on hold because of rules about social distancing. But Laurell Sims, who helped start the group, said they are still putting effort into food production and getting produce to families who need it. The group is selling bags of homegrown vegetables like kale, spinach and scallions.

Sims said prices for some kinds of produce are beginning to increase in Chicago.

She said most community gardens right now are closed. But her group is hoping to get them reopened with limits on the number of people permitted to work in them at one time.

Kristen M. Hall reported on this story for the Associated Press. Jonathan Evans adapted it for Learning English. Mario Ritter, Jr. was the editor.

poster –n. a usually large sheet with writing or pictures on it that is displayed as a notice, advertisement, or for decoration

garden –n. an area of ground where plants such as flowers or vegetables are grown

author –n. a person who has written a book or who writes many books

desperate –adj. very sad and upset because of having little or no hope