Update Required To play the media you will need to either update your browser to a recent version or update your Flash plugin.
By VOA
08 September, 2014


The Israeli military campaign in the Gaza Strip resulted in the death of an estimated 2,000 Palestinians. Many of those killed were not involved in the fighting. This is a cause of concern for many American Jews. They feel loyal to the state of Israel. But they also believe the Israeli government may have gone too far in Gaza. VOA spoke with several influential Jewish American leaders.

Rabbi Michael Lerner says he shares a broken heart with many American Jews. They love Israel and support a Jewish homeland. But he says they also believe it must be a place that presents Jewish values like justice and showing concern for others.

Rabbi Lerner says there is a huge contradiction, or conflict, between those ideas and what Israel has been doing to the Palestinian people. He says the attack on Gaza led to the death of 2,100 Gazans, hundreds of whom were children. He notes how the fighting led to the destruction of many homes, the electrical system and the water system. 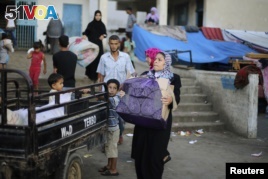 A family leaves a United Nations-run school sheltering displaced Palestinians, before making their way home after a ceasefire was declared, in the southern Gaza Strip, Aug. 27, 2014.

"This has caused a great deal of anguish among many American Jews."

Michael Lerner launched Tikkun, a national Jewish magazine. Its reports deal mainly with faith-based social change. The clergyman says most American Jews believe Israel had no choice but to react with force to rockets fired by Hamas supporters. But he thinks that Israel could have stopped the violence at any time.

"Israel has the power. Hamas does not have the power."

Another Jewish leader says that is part of the problem. Ammiel Hirsch is a rabbi at the Stephen Wise Free Synagogue in New York.

"If you're sitting on your balcony and on the other side of the street, there is a person who's shooting at you from his balcony and he's holding a baby in his hand, what should your response be?"

He says there are rules of war, and they should be followed. But where there are violations, people should be held responsible. He says the idea that Israel purposefully targeted civilians is a big lie and should be rejected.

"The idea that you can't criticize Israel without being accused of being anti-Semitic means that Israel as a state has carte blanche to do anything."

Rebecca Vilkomerson says those accusations have been made against her organization, Jewish Voices for Peace. Ms. Vilkomerson is head of the group. She says it was the only Jewish organization that openly opposed the war in Gaza. But she is quick to say the group does not support Hamas.

Rabbi Hirsch makes a point of rejecting any suggestion of a moral similarity between Hamas and Israel.

"Hamas is as an anti-Semitic, anti-Western, anti-feminist, anti-gay, anti-Christian terrorist group, and Israel is a liberal democracy, fighting for its life in a very, very bad neighborhood. At the same time, what I personally have emphasized to our people over many years is that this issue is not going to be resolved except through political negotiations.

For now, a ceasefire between Israel and Hamas is in effect, although tensions remain high. Most people agree that Israel easily won the war in Gaza. But Hamas won some popular support for its rocket attacks on Israel and its resistance to the Israeli campaign.

This report was based on a story from VOA reporter Adam Phillips. It was written for Learning English by George Grow, and edited by Mario Ritter.

military – adj. of or about the armed forces

values – n. the quality of being useful, important or desired

social – adj. of or about a group of people

popular – adj. liked by many people; generally approved by the public

Now it's your turn to use these Words in the News.