Update Required To play the media you will need to either update your browser to a recent version or update your Flash plugin.
By Christopher Cruise
07 September, 2014


Methane gas from a lake in Rwanda may soon become a major supply of electricity. Millions of people in that central African country could use the energy. An American company and the Rwandan government signed the power agreement in early August at the U.S.-Africa Summit in Washington. The company is Symbion Power. The deal will provide electricity, and lower the risk of an environmental disaster at Lake Kivu.

There are three lakes in Africa that contain such high levels of carbon dioxide and methane gas that they are at risk of exploding. Two of them, Lake Nyos and Lake Monoun, are in Cameroon. They exploded in the 1980s. Carbon dioxide released in the Lake Nyos explosion killed more than 1,700 people. Some victims were as far as 26 kilometers away.

Lake Kivu, in Rwanda, could have an even worse gas explosion. That is because more than two million people live near the shores of Lake Kivu, including in the large towns of Goma and Gisenyi. 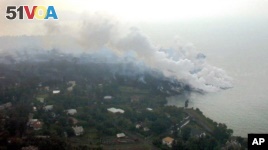 Lava hits the waters of Lake Kivu releasing gas and steam during an eruption of Nyiragongo volcano.

Paul Hinks is the chief of Symbion Power. Last month, the company agreed to build a power station at Lake Kivu. Mr. Hinks says it is important that the methane be removed from the lake before a disaster happens.

"The buildup of methane in Lake Kivu is a serious problem for Rwanda, so the plan for Lake Kivu is to turn methane gas into power."

Scientists agree that the methane level must be lowered in Lake Kivu. But, there are worries that the act of pumping out the gas could cause problems.

"The problem is of course (if) you just put in a pipe and start sucking out the water and separating the methane and the CO2 from the water, there is a potential to create the very problem you're trying to avoid, which is escape of the methane gas into the atmosphere."

Symbion Power agrees that this is a risk. Mr. Hinks says his company will work to remove the gas safely.

"There's a set of rules, if you like. They're called lake management prescriptions, and they cover all the issues that companies like us have to follow when they extract methane gas from the lake."

Kibuye Power company already operates a small power center that uses the lake's methane. Laurent Sibomana supervises the center in the town of Gisenyi. He told VOA it is not easy to remove methane gas from the lake.

Mr. Hinks says Symbion Power has experience working in difficult places, including Iraq and Afghanistan. He says it has the knowledge and money to succeed at Lake Kivu.

supply - v., to give; to provide; n., the amount of something that can be given or sold to others

problem - n., a difficult question or situation with an unknown or unclear answer