Update Required To play the media you will need to either update your browser to a recent version or update your Flash plugin.
By Christopher Cruise
08 September, 2014


Researchers have developed an experimental vaccine that protects monkeys against the Ebola virus. They are now testing this vaccine on human volunteers in the United States. Plans call for additional testing on volunteers in Britain and West Africa.

A report on the experimental vaccine was published on Sunday in the journal Nature Medicine. More than 20 researchers were involved in the Ebola study.

Researchers from the U.S. National Institutes of Health reported that the vaccine was given to four monkeys. The treatment protected all four animals against Ebola when they were exposed to the virus five weeks later. Reports say other monkeys left unprotected died within six days. 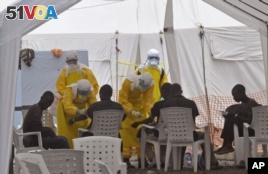 Health workers care for people with the Ebola virus, at a clinic in Monrovia, Liberia, Monday, Sept. 8, 2014.

The researchers said they gave a second, or "booster," vaccine to another group of monkeys two months after the first injection. This vaccine was similar to the first. It extended protection for all vaccinated monkeys for up to 10 months. They did not become sick.

Eight monkeys were given the first injection but not the second. When these animals were exposed to Ebola 10 months later, half of them died.

The vaccine tested by the NIH is similar to one being developed by drugmaker GlaxoSmithKline. It prepares the body's natural defenses against disease to fight the virus when an infection takes place.

The human testing began last week at the NIH near Washington, DC. The tests involve about 20 healthy volunteers. Researchers want to know not just if the vaccine is safe, but if it can cause the human body to react strongly enough to prevent Ebola infection. The volunteers will get only the first injection, not the booster shot. But, in later tests, volunteers will receive both vaccines.

The World Health Organization says it will know by November if the vaccine is safe for people. If so, it would be sent quickly to West Africa, going first to healthcare workers.

The NIH says as many as four vaccines are being developed. Ten drugs are being tested as possible cures for people already infected with Ebola.

President Barack Obama says the U.S. military would help in the fight against Ebola. The disease has killed more than 2,000 people in West Africa. The affected countries include Sierra Leone, Liberia, Guinea and Nigeria.

Mr. Obama spoke Sunday on the NBC television program Meet the Press. He said military equipment will be used to build "isolation centers" -- places where people infected with the virus can be separated from others. He said the U.S. military could also provide security for international health workers.

Mr. Obama warned that it will be months before the virus is stopped. But he said if efforts are not made to stop Ebola, it could spread across Africa and around the world.

Dr. Anthony Fauci is the head of the National Institute of Allergy and Infectious Diseases at NIH. He told Bloomberg News that widespread use of a vaccine is still, in his words, "a pretty long way off." And he warned that "the epidemic is not going to be contained by what we are doing now."

In Sierra Leone, officials have told people to stay at home for three days later this month as part of an effort to stop the spread of Ebola. A government official said last Saturday that people will not be permitted to leave their homes from late September 18 until September 21.

The aid group Doctors Without Borders has criticized the quarantine order. It said it may cause people to try to hide their infections.

Experts have repeatedly said that quarantines and border closures do not help control Ebola. Instead, they say people suspected of being infected should be immediately treated.

The NIH says it knows how to stop the spread of Ebola: find people infected with the virus, keep them away from others, give them medical care and treat others they may have infected. It says people must be taught how to safely bury those who die from the disease. And it says healthcare workers must be trained how to control infections in hospitals. It says following these methods "is how all previous Ebola outbreaks have been stopped."

Dr. Fauci said that if we want to stop the spread of the virus, we must, in his words, "make sure people do what works."

experiment - n. a test or trial carried out to prove if an idea is true or false, or to discover something

extend - v. to stretch out in area or length; to continue for a longer time

infected - v. to make sick with something that causes disease