Update Required To play the media you will need to either update your browser to a recent version or update your Flash plugin.
By Caty Weaver
12 January 2023


An American woman is suing several companies in connection with her husband's COVID-19 infection and death.

Patricia Woodward accused companies involved in the 2021 production of a television series of ignoring safety measures. The measures were designed to prevent the spread of the virus among workers.

Woodward began the action in January at a federal court in Boston, Massachusetts. Her husband, Paul Woodward, worked as a passenger vehicle driver for the production group in the town of Provincetown, Massachusetts. He transported crew to and from their hotel to places where filming was to be done. He had tested negative when he began working on the project in February of 2021. He left the project to go to the hospital in mid-March after experiencing signs of COVID-19 infection. He died of COVID-19 on April 18. He was 67. 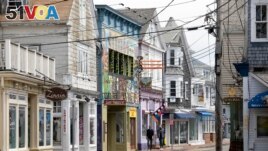 "He passed away on the morning of our 25th anniversary," wife Patricia Woodward said in an interview with NBC10 Boston, a local television station. "So that day, instead of going out to dinner or having champagne, I had to go to the funeral home...," she said.

The lawsuit seeks damages for wrongful death, recklessness and gross negligence, pain and suffering, and loss. The companies did not immediately answer requests for comment.

Patricia Woodward said that the filming in Provincetown happened before the widespread availability of COVID-19 vaccines and during a period of strong COVID-19 restrictions.

During the filming, the production companies brought in hundreds of workers who stayed in hotels.

The legal case noted that the defendants' COVID-19 measures were supposed to include exact and frequent testing, safe distancing, safe transport between filming sites and work areas, and the use of masks and protective equipment.

The legal case also said crew, actors, contractors, and other employees "openly flouted and violated the COVID-19 safety" rules. And it said the companies failed to take the necessary corrective action about that situation.

For example, legal documents in the case say that Paul Woodward was ordered to drive a vehicle that did not have a protective barrier in place. Barriers separate the driver from the passengers to prevent possible passage of the virus. The legal case said other vehicles used in the production did have protective barriers.

In addition, the lawsuit noted there were also supposed to be safe distancing, occupancy limits and masking requirements in the automobile, but that the rule was ignored by passengers and not enforced by the defendants.

sue – v. to seek justice or right from (a person) by legal process

interview – n. a meeting at which information is obtained (as by a reporter) from a person

gross negligence – n. carelessness to the point of reckless disregard for the safety or lives of others, and is so great it appears to be a conscious violation of other people's rights to safety

flout – n. to ignore in a disrespectful way

occupancy –n. related to the number of people permitted in a place at one time