José Andrés, His Daughters Eat Their Way through Spain

Update Required To play the media you will need to either update your browser to a recent version or update your Flash plugin.
By Dan Novak
31 December 2022


José Andrés is a famous Spanish-American chef with many restaurants in the United States. He has also helped shine a light on humanitarian disasters with his World Central Kitchen. The organization provides food to people after natural disasters.

He has a new television series called "José Andrés and Family in Spain." In the show, he travels with his three America-raised daughters on a food tour through Spain.

During the new show, Andrés goes into a restaurant kitchen in Spain and sees a large eel. Andrés watches as cooks prepare the eel. 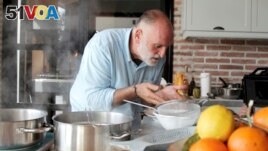 This image provided by Discovery shows host Jose Andres in the kitchen cooking for his family and friends in Asturias in a scene from the Discovery + television series "Jose Andres and Family in Spain." (Discovery via AP)

"People of the world, I know you don't usually eat eel. But if you try it, you will love it," he says. "Nothing can be more simple and more sophisticated at the same time."

Andrés daughters, Carlota, Inés and Lucia Andrés, join their dad as they visit places like Barcelona, Madrid, Andalusia, Valencia, the Canary Islands and Asturias. The chef was born in Asturias. The food there, he says, made him who he is.

The new program is a travel show, a cooking show and a parenting show, all at once.

"I think going with my dad and going to all of these places was just so special because he's such a curious person," Carlota Andrés said.

José Andrés has a deep love for food and respect for where it comes from. He includes both respected restaurants and street food in the new show.

Tapas are small plates of food often served in Spanish restaurants. Tapas are a good representation of Andrés' philosophy on eating. Eating tapas, he goes from place to place eating many things, cold and hot, fish and meat and vegetables.

"If I was the president of the world, I would make it mandatory that every person has to go around the world for a year of their lives — country to country, culture to culture, continent to continent," he said.

During it all, José Andrés supports Spanish cuisine.

"I think every culture needs to be proud of who they are and even chauvinistic about it. In my case, sometimes I take it to the extreme," he said.

The spicy potato dish patatas bravas, glasses of wine and pastries were on the menu in Madrid. In Valencia, the travelers ate paella, a traditional Spanish rice dish. "You think you've tasted the real thing — think again," the chef says.

The family hopes that the series will inspire other families to go out and explore, especially after almost three years of the pandemic.

chef — n. a professional cook who usually is in charge of a kitchen in a restaurant

tour — n. a journey through the different parts of a country, region, etc.

cuisine — n. a style of cooking

chauvinistic — adj. believing that your country, sex, etc., is better than any other

inspire — v. to make want to do something

remote — adj. far away from other people, houses, cities, etc.