Update Required To play the media you will need to either update your browser to a recent version or update your Flash plugin.
By VOA
12 February, 2015


The terrorist attacks in Paris have increased tensions in France between French citizens and immigrants. The anti-immigration National Front party says the attacks prove what it has been warning about -- that France is being attacked by radical Islamists. Party leaders say France must stop letting people from other countries immigrate.

VOA went to the French town of Bagnolet to learn why some voters are supporting The Front.

Alain Barre does not oppose immigration. His own wife is from Cuba. He believes European immigrants have made France a better country. But he says the most-recent immigrants are hurting the country's economy and threatening its stability. 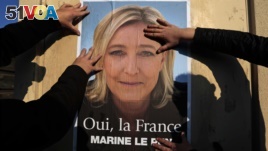 In this 2014 file photo, supporters paste a poster of Marine Le Pen, France's National Front leader, on a wall before a political rally in 2014. (REUTERS/Eric Gaillard )

Mr. Barre lives in Bagnolet, a town separated from Paris by only a busy road. Communists controlled the town for many years. Now, Socialists do.

Mr. Barre supports The National Front. He believes Islam threatens France. And, he says, increasingly so do his friends.

"They tell me if we are not reacting between (in) a few years it will be civil war in France."

The National Front believes as Mr. Barre does. After the attacks in January the party printed a poster that shows jihadist fighters and the map of France with the words: "Islamist peril: Let's Protect the French."

National Front leader Marine Le Pen says that the party has been warning about the dangers of Islamist fundamentalism for years. Even today, she says, politicians do not offer what she believes are the correct solutions: end immigration and close the country's borders.

The Front was founded in the 1970s. Few voters have supported it since its founding, and its members have had little success in campaigns for political office. But that has been changing recently. Last May it received 25 percent of the votes in European Union elections. Still, few French people will publicly admit that they support the party. 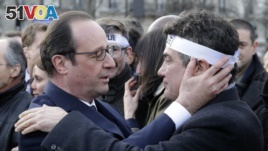 Even after the attacks, The Front stayed apart from other political parties. Its leaders did not join a huge march in Paris that followed the attacks. Its members gathered separately in another place.

Support for the country's unpopular president, Francois Hollande, has doubled since the attack. But political experts say that support will soon return to its low level. They believe that as time passes, more people will ask questions about security and radical Islam.

Sociologist Michel Wieviorka says that is when voters will decide to support The Front's strong security and anti-immigration message.

The country's economic condition is still poor, and many people are jobless. The ruling Socialist party has struggled to answer the concerns of the French people. And public opinion studies show The Front is gaining support. A new study shows Ms. Le Pen would win the first round of presidential elections in 2017 if they were held today, but would lose in the second.

The Front even seems to be gaining support in towns like Bagnolet, which have high numbers of immigrants.

Herve Atlan is a pharmacist in the town. He is also worried about how his country is changing. He says he bought food at the grocery store in Paris that was attacked last month by an Islamist. His children attend a Jewish school nearby.

Mr. Atlan says the government promises to protect Jews like himself, but does not take action. But he says The National Front is not the solution. He says in the past, The Front was considered anti-Semitic, although Marine Le Pen has sought the votes of Jews in recent years.

Aouahid Tamin and Tahar Azoula are French Muslims. They were born here. Their parents came from North Africa. They are looking for work. They say it is hard to find a job, and their Muslim names make it harder.

Mr. Tamin says he does not support any political party, but he might vote for Marine Le Pen.

He says she supports people with blond hair and blue eyes. But he says we support her for saying what she believes and for not lying about her beliefs.

The Front's message will be tested next month, when local elections take place. A recent public opinion study showed 26 percent of expected voters would support the party. Mr. Barre says he is sure The Front will get many votes in Bagnolet because the French people want change.

immigrant(s) – n. a person who comes to a country to live there

immigrate – v. to come to a country to live there — often + to

peril – n. the possibility that you will be hurt or killed or that something unpleasant or bad will happen; danger

apart – adv. separately from (something)

doubled – v. to cause (something) to become two times as great or as many

pharmacist – n. a person whose job is to prepare and sell the drugs and medicines that a doctor prescribes for patients

Do you support or oppose the policies of the National Front Party? We want to hear from you. Write your thoughts in the comments section.