Argentines Vote for Next President


On Sunday, Argentinians voted for their country's next president.

But the surveys were wrong. Mr. Scioli won 35.9 percent, but not enough to win the presidency. Mauricio Macri, the mayor of Buenos Aires, finished in second place with 35.2 percent of the vote. 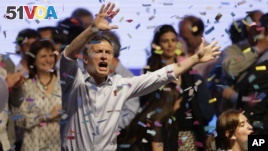 This means Argentina will hold its first-ever runoff election next month. Voters will choose between the two men on November 22.

Mr. Macri says he wants to lift some financial controls and trade restrictions in an effort to help the country's economy. The 56-year-old mayor formerly led the Boca Juniors, a popular football club.

Mr. Scioli has promised to defend the central ideas of what observers are calling "kirchnerism." These are populist beliefs built around trade protectionism, social welfare programs and defense of the working class. The 58-year-old governor adds that he will seek a more measured approach to economic reform.

Do you have an insight about the Argentinian elections? Please leave a Comment in the section below or on 51VOA.COM.

This story is based on reports from VOANews.com. Jonathan Evans adapted it for Learning English. George Grow was the editor.

approach – n. a method; a way of dealing with something

margin – n. a measurement of difference

runoff – n. an additional race, contest, or election that is held because an earlier one has not resulted in a winner