A VOA reporter tweeted from Kabul that "conservative estimates" are 154 people dead and 1,191 others injured.

The quake was centered in the Hindu Kush Mountains of northern Afghanistan. The United States Geological Survey says the quake measured 7.5. It said the shaking was most intense about 82 kilometers southeast of the Afghan city of Feyzabad. 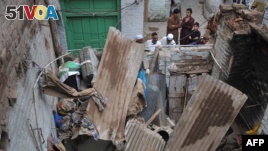 The hardest hit area was the Pakistani province of Khyber Pakhtunkhwa. Officials there have confirmed at least 123 people killed and more than 950 injured.

The Afghan chief executive Abdullah Abdullah, said through social media, the earthquake was "the strongest one felt in recent decades." He also urged people to stay away from buildings for fears of additional quakes.

The earthquake caused power and telephone outages in the Afghan capital, Kabul. Many people fled to the streets. Afghan office workers there and in other cities had no choice but to stand in the streets or sit next to roads after the disaster.

An eyewitness in Jalalabad told VOA the quake sent people running. "We have not seen an earthquake this powerful. I was sleeping when I felt Earth shaking. I ran out for safety," he said.

The Afghan provinces of Nangarhar and Takhar were hit hard. At least five people were reported dead in Nangarhar. At least 12 students were crushed to death in a stampede at a girls' school in Takhar province. Another 30 injured students were taken to a hospital.

The earthquake also was felt in the capitals of India and Pakistan. In New Delhi, the quake shook buildings, while office workers escaped to the streets. In Pakistan, state-operated television says most of the victims died when homes or housetops collapsed. Landslides were also reported.

Indian President Narendra Modi said through social media that his country is studying the damage. He also said India is ready to assist in Pakistan and Afghanistan.

The U.S. Geological Survey also measured two smaller earthquakes measuring 4.7 and 4.8. These tremors took place in the same area and within 90 minutes of the major quake.

This report was based on information from VOA News, with additional material from the Associated Press and Reuters. Jim Dresbach adapted this story for Learning English. George Grow was the editor.

stampede – n. an occurrence in which a large group of frightened people run together in an uncontrolled way to get out of a place

tremor – n. a shaking movement of the ground before or after an earthquake

This is developing story. Write to us in the Comments Section and on 51VOA.COM.