Did an Armenian Army Officer Fight in Gallipoli Battle?

Update Required To play the media you will need to either update your browser to a recent version or update your Flash plugin.
By George Grow
22 April, 2015


Friday, Turkey marks the 100th anniversary of the Battle of Gallipoli in World War I. The battle was a major military campaign. The Ottoman Turks defeated a British-led invasion, but later lost the war.

Also on Friday, Armenians around the world will mark 100 years since the killings of large numbers of Armenians by the Ottomans. Armenians use the word "genocide" to describe the killings. But Turkey argues that the number of deaths is overstated. And it says those who were killed died during a civil war.

The events of a century ago are captured in the story of a Turkish Armenian army officer. The publication of his recollections of the Battle of Gallipoli has fueled debate in Turkey. 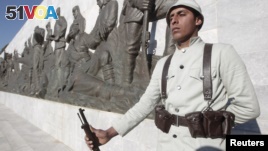 A Turkish soldier in historical uniform stands at a ceremony marking the 100th anniversary of the Battle of Canakkale, as part of the Gallipoli campaign in Gallipoli, Turkey, March 18, 2015. (REUTERS/Osman Orsal)

The officer was named Sarkis Torossian. His story explores many subjects considered taboo or largely ignored in Ottoman history. In other words, Turks refuse to talk about them today.

In the early 20th century, Captain Torossian was recognized for his work in the army of the Ottoman Empire. Yet his mother and sisters died when the Ottoman government forced large numbers of Armenians from their homes. Armenians and others have used the word genocide to describe this mass expulsion. But the Turkish government strongly rejects this description.

Ayhan Aktar is a professor at Bilgi University in Istanbul. He says the most troubling part of Captain Torossian's story is that he fought at the Battle of Gallipoli. He says the story disputes Turkey's official version of events, which says only Turks fought at Gallipoli. He notes it is also in conflict with the latest Islamic explanation of the battle.

Professor Aktar says publishers were persuaded to produce the book in Turkey because of the importance of Captain Torossian's story. He says he knew the memoirs would create a debate. But he says he was surprised when Turkish nationalists, Islamists and even the army joined to attack it.

"I was not expecting such a debate. I was not expecting such a fury. They told me that I was na?ve, I was cheated by the text, and they tried to discredit the book, saying that this guy is a systematic liar. When the Torossian debate started, (the) Turkish chief of staff made an official declaration, saying that there was no officer called Sarkis Torossian on the Gallipoli front in 1915."

Turkish President Recep Tayyip Erdogan has admitted the truth of the story. Mr. Erdogan made note of it in a message to Armenian President Serzh Sargsyan. Mr. Erdogan wanted to persuade the Armenian leader to attend the Gallipoli anniversary observances. But the offer was refused.

Professor Aktar says the debate over the book has created a worrying atmosphere for Turkey's small Armenian minority.

"An Armenian Facebook friend wrote me a personal message, saying that my grandfather, Hacik Bey, was wounded at Gallipoli. I wrote to him saying can I use this account? He said please do so, but don't give my name. I mean, this upsurge of nationalism against an Armenian officer who fought in the army created a kind of uneasy feeling in an ordinary Turkish-Amernian citizen, who is still having the trauma of genocide and I never forgive this."

He says the book has opened the way for other recollections of Armenian officers who fought at Gallipoli to become known.

"This debate on Captain Torossian initiated another upsurge of research about who were these officers in the Ottoman Army. Actually, I am very proud of it. While we are commemorating a battle of resistance or heroism, we should never forget the ones who are fighting with us. This is very important and we should pay respect."

Many Turks question the involvement and even the presence of Armenian officers in the Ottoman army at the Battle of Gallipoli. But observers say the debate about the book and the publishing of similar stories mean another historical taboo has been tested and is now being discussed.

Dorian Jones reported this story from Istanbul. George Grow wrote it for Learning English. Christopher Jones-Cruise was the editor.

recollections – n. the act of remembering something from the past

memoirs – n. writings in which someone describes past experiences

Do you believe Captain Torrosian fought at Gallipoli? Do you think the mass deportation of Armenians by the Ottoman rulers should be considered a genocide? We want to hear from you. Write to us in the comments section.