Update Required To play the media you will need to either update your browser to a recent version or update your Flash plugin.
By Anne Ball
19 February 2020


A space object billions of kilometers away from Earth is giving scientists information about how our planet, and others, were formed.

It is the most distant object ever explored by a spacecraft. It is named Arrokoth, and sometimes called "Snowman" because of its shape.

NASA's New Horizons spacecraft flew past Arrokoth on New Year's Day, 3 years after exploring Pluto, which is located just past the planet Neptune in an area called the Kuiper Belt. 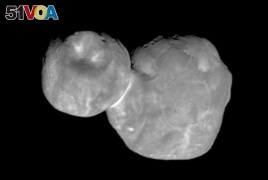 The New Horizons spacecraft has been providing scientists with information about the formation of Neptune and other planets.

Pictures it sent back of Arrokoth show a reddish surface. It appears to be largely smooth, with some craters—areas that are lower than their surroundings. It is covered with frozen methanol, a kind of alcohol, and unidentified complex organic molecules.

Arrokoth is a small body -- 36 kilometers long and 20 kilometers wide. It is classified as a planetesimal — objects that were among the original building blocks of our solar system. Scientists believe these small bodies came together about 4.5 billion years ago. They are thought to be an important middle size step on the way to building planets.

The space object is made of two round parts joined together, notes John Spencer, an astronomer at the Southwest Research Institute in Colorado. They "appear to have formed in orbit around each other from a local dust cloud, which collapsed under its own gravity within the solar nebula - the huge disk of dust and gas that the solar system formed from," he said.

The two parts then came together "very gently." This suggests that planetesimals formed in local conditions in which crash speeds were slow, instead of widely spaced objects coming together at high speeds.

"So we now have a clearer picture of how planets, including the Earth, were built," Spencer said. He helped prepare a report on the study, which appeared in Science magazine.

When spacecraft visited planetesimals before, they were all badly damaged by objects that struck them. Some experienced extreme heat because they moved too close to the sun.

"So it is thrilling to finally be able to see one still pretty much just as it was after its formation," said Will Grundy, who is working with the New Horizons project. He is a planetary scientist and study co-author from Lowell Observatory in Arizona.

One of the scientists on the New Horizons team is better known for his music than his doctorate—an advanced degree in astrophysics. Brian May, lead guitarist for the British group Queen, is passionate about space exploration, as well as music. He wrote this song for the New Horizons project:

New Horizons will examine other objects in the Kuiper Belt from afar as it makes its way deeper into space.

Anne Ball wrote this story, with information from Reuters and VOA. The editor was George Grow.

What do you think of this story? Write to us in the comments section below.

building blocks – n. an important part that is grouped together with many other similar things to form something larger — usually plural

nebula – n. a group of stars that are very far away and look like a bright cloud at night