Autumn Years and Other Phases of Life

Update Required To play the media you will need to either update your browser to a recent version or update your Flash plugin.
By Anna Matteo
19 October, 2019


And now it's time for Words and Their Stories!

Each week, we tell the story of English language words and expressions. On our program today, we will talk about seasons. In some places, there are four: winter, spring, summer and autumn.

Many areas in Earth's northern hemisphere have just experienced a change of seasons -- from summer to autumn. Hours of daylight grow shorter, and temperatures drop. Nature is entering a quiet phase. Flowering plants stop producing flowers. Leaves growing on some trees change color, die and fall to the ground. Some animals become less active and hibernate during the winter months.

Nature has its phases and so do we.

Like seeds shooting signs of life through the soil, spring is a time of rebirth. If it were likened to a human life, spring is the time when we enter the world as innocent as a newborn baby. 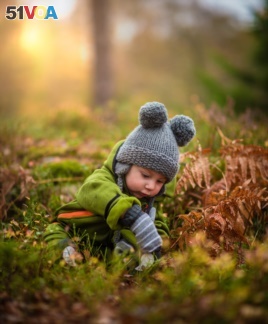 A baby plays in the autumn leaves.

Then babies become toddlers. They learn the word "no" and use it a lot. Bad behavior can be a problem during this period. No wonder it is often called the "Terrible Twos." But other than this "terrible" part, childhood is a magical time, or at least, it should be, when everything seems possible.

However, those feelings of wonder are often dampened during a child's adolescence. The growing pains and angst of the teenage years can be a dark time, indeed. But then we become young adults. We try to make it on our own.

For many people, their 20s and 30s are the prime of life. This is the time when they are at their personal best. But the prime of life can happen at any time. Some people peak really early. They hit their prime in high school or college. After that, it may be all downhill. He or she is filled with memories of the glory days – always reliving an earlier, happier time.

We just sit around talking about the old times,

She says when she feels like crying she starts laughing thinking about ... Glory days - they pass you by Glory days - in the wink of a young girl's eye, Glory days, glory days ... Other people may be late bloomers. They do not hit their peak until much later in life. And still others live their lives as if the best is yet to come ... always!

Whenever you peak, we all begin to slow down a bit. As we age, we hit a phase that some people call midlife. In this phase we are busy working and possibly raising a family. Even though we are busy, we may feel that life has become predictable. So, this is when many people want to change things, a lot! They have a so-called midlife crisis... or two. They may buy a really fast motorcycle, get a tattoo or take up a new and dangerous hobby -- like skydiving.

But this passes and things calm down again as we enter the next phase – the autumn years.

If spring is the season of being born, autumn is the season of dying -- or at least slowing down for the winter. Our autumn years is the period after we retire from work and start to slow down. Many people love this phase and enjoy their time in retirement.

However, we have other terms that describe this latter part of life. You might hear them called the twilight years. For many, this could suggest that the "end is near."

So, perhaps a better expression is the golden years. This describes a time that is carefree and easy. Golden, you might say. You finally hit a phase where you don't have to care what other people think anymore.

Perhaps this is why we sometimes call the autumn years, or golden years, a second childhood. We can live like a child again, hopefully, without a care in the world.

Some people in their autumn years of life may have some regrets. But seriously, who wouldn't? Nearly everyone has a few "what-ifs" and "should-haves."

But as we say, you can't change the past. You can only look to the future ... whatever stage of life you are in.

And that's Words and Their Stories. Until next time, I'm Anna Matteo.

Anna Matteo wrote this story. George Grow was the editor. Earlier in the story, Bruce Springsteen sings "Glory Days." At the end of the story, David Bowie sings "Golden Years."

hibernate – n. of an animal : to spend the winter sleeping or resting

angst – n. a strong feeling of being worried or nervous : a feeling of anxiety about your life or situation

hobby – n. an interest or activity engaged in for pleasure