Update Required To play the media you will need to either update your browser to a recent version or update your Flash plugin.
By Anna Matteo and Kelly Jean Kelly
05 October, 2019


Hi there and welcome to this week's Words and Their Stories!

On today's show we will talk about an idiom of warning. And it is not very easy to say: Loose lips sink ships.

This idiom began during World War II as a slogan used by the United States Office of War Information. It was part of a propaganda campaign. So, the slogan "loose lips sink ships" was printed on posters and hung in many public places, such as schools and churches.

This wartime expression warned people in the military as well as ordinary citizens to watch what they say. Unguarded talk may give useful information to the enemy.

Part of the propaganda campaign warned that simply revealing the location of a loved one on a ship could be dangerous. That information could be passed on to the enemy or to a spy. The posters show in detail a ship being attacked and soldiers being killed.

This idiom still may not make sense to you. So, let's break it down. Something "loose" moves easily. So, loose lips move freely and release a lot of words -- most likely in a careless way. If you speak carelessly (that's the "loose lips" part) about private or sensitive information, someone could hear and use it to damage or ruin something important (a "sinking ship" is pretty bad).

The message: Be careful when you speak. Watch what you say. Beware of spies. And during war, you never know who is a spy. That is the nature of spying. 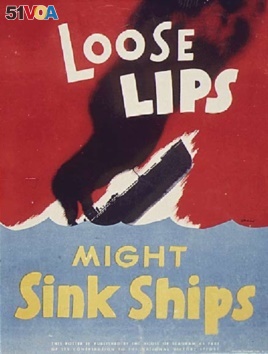 Copy of a World War II poster from the U.S. Office of War Information.

One of the most famous – or maybe I should say infamous – spies in history was the Dutch dancer Mata Hari. Well, Mata Hari was the name she used when she performed as a dancer in Paris in the early 1900s.

The online Encyclopedia Britannica explains that Mata Hari was romantically linked to a number of men. Many of them were military officers around the time of World War I. Both Germany and France must have believed some of those officers would have loose lips around this beautiful woman, because the two countries sought to get secret information from her.

But when French officials suspected she was spying for Germany, they arrested her. She was tried and found guilty of supplying Germany with information. She was shot by firing squad on October 15, 1917.

It is unlikely that Mata Hari was responsible for sinking any ships. And she may not have been a spy. Some documents reportedly prove her innocence. Although her relatives may find that evidence to be cold comfort -- after all, her reputation remains damaged. We still use the name "Mata Hari" to describe a devious woman who uses her sexual appeal to get men to spill their secrets.

Now, let's go back to loose lips sinking ships. Keep in mind that you do not have to be in the middle of a war to use that idiom.

For example, let's say you are working on a project at work with a small team of people. Until you are ready to launch the secret product it is best that no one else knows. So, you can warn your teammates that "loose lips sink ships." If they want the project to be successful, they should keep the details to themselves.

Be careful what you say, Loose talk could sink this ship Well the way that I am, I was weak as a lamb, See it on my shaky lip

synonym – n. a word that has the same meaning as another word in the same language

devious – adj. willing to lie and trick people in order to get what is wanted