Update Required To play the media you will need to either update your browser to a recent version or update your Flash plugin.
By Anna Matteo
24 April 2021

On this program, we explore words and expressions in American English.

For half the planet, it is springtime. That means warmer temperatures and new growth on plants and trees.

Trees are amazing and do so much for our environment. The basic parts of a tree are the trunk, the roots, branches, and limbs. 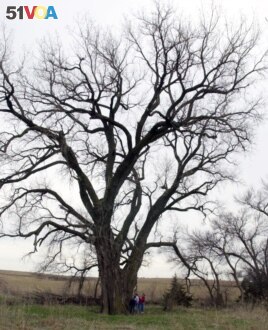 Members of the Hackbart family stand next to a giant cottonwood tree on the family property near Milford, Neb., April 13, 2002. The national co-champion Eastern cottonwood tree is between 100-and 150-years old. (AP Photo)

Today we are going to talk about limbs.

If you like watching squirrels play in trees as much as I do, you may have noticed something. They jump from one limb to another. They are fearless even as they walk out on the weakest-looking limb. They are simply not afraid.

And that is our expression for today -- "to go out on a limb."

When you "go out on a limb" you take a risk. You take a chance. You are brave by doing something that could hurt you. You know, when you climb out onto a tree limb you could fall and get hurt.

But here's the thing with this expression. More often than not the risk is an emotional, social, or political one. It is usually not a physical risk – like the ones our squirrel friends take.

It means you put yourself out there and open yourself up to criticism or judgement.

Let's say I have a friend, Jake. Well, Jake just lost his job, and he is really upset about it. However, he has a plan. He plans to go to his ex-boss's office unannounced and explain all the reasons why she should give him another chance.

I think ... no, I know this is terrible idea. But Jake does not want my suggestions. In fact, he gets very upset when I warn him.

So, I say to Jake, "Look, this might upset you, but I'm going to go out on a limb. I think it's a really bad idea to visit your ex-boss at her office. Really bad. Why don't you just call instead? A call is better. And a call won't get you arrested for trespassing."

Here is another way to use it.

Let's say I put in a good word for Jake with my boss. This means I speak highly of him. As a result, he ends up getting a job interview. I really went out on a limb for Jake. I know he's not that great of a worker. But he promised to do better. Still, my relationship with my boss is on the line. This means it is at risk of being damaged. I went out on a limb for Jake. I really hope I don't regret it.

trunk – n. the thick main stem of a tree

limb – n. a large branch of a tree

branch – n. a part of a tree that grows out from the trunk

chance – n. an opportunity to do something : an amount of time or a situation in which something can be done

brave – adj. feeling or showing no fear : not afraid

trespass – v. to go on someone's land without permission

put in a good word – phrase : to say something good about someone

regret – n. a feeling of sadness or disappointment about something that you did or did not do