'Climbing the Ladder' to Success

Update Required To play the media you will need to either update your browser to a recent version or update your Flash plugin.
By Anna Matteo
10 April 2021

On this program, we explore words and expressions in American English. 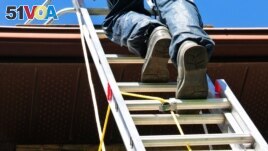 Ladders help us reach high places ... in more ways than one!

Today we talk about a tool for reaching high places – a ladder.

Ladders are made from two long pieces of wood, metal, or rope with a series of steps, called rungs, between them. We climb the rungs to reach higher up.

But we can also climb a different kind of ladder. When we climb the ladder in our job to reach a higher level, we are climbing the ladder of success.

When we speak of a ladder this way, it represents a series of steps or stages that leads to a higher or better position. As you climb the ladder, you become more powerful and more successful.

Take, for example, the corporate ladder:

Some people are very ambitious. They want to get ahead, so they work hard at their career. They think about it seriously and have a plan. Most people who succeed have some level of ambition.

But some people use "climbing the ladder" in a negative way. Let's say on your way up the ladder of success you step on others or try to push them off their ladders. This might mean you are so ambitious that you forget to treat people well. Getting ahead in your job is the only thing you see as you climb up your ladder.

However, as some people climb, they reach down and help up those on the lower rungs. Or, if someone on a rung above them is having trouble, they help them.

You can use the expression "climb the ladder" with or without the word "success."

Now, let's listen to these two friends as they use this expression.

Hey, how are you? I haven't heard from you in such a long time!

I've been good! I've been taking a lot of online classes. So, I just finished a business degree.

Good for you! I've been spending too much time at home watching Netflix.

Well, that can be fun too. But I have some career goals that I need to meet by the end of the year.

You are way more ambitious than me. I'm not really interested in climbing any career ladders.

You're on your own. I have older parents to take care of. So, for me climbing a few more rungs on the ladder means more money and more security.

That is such a good point. But you still need to have fun. Why don't we celebrate your new degree with a hike in the mountains this weekend?

If knowing English helps you move up the ladder in your career, keep coming back to VOA Learning English!

stage –n. a point or period in the growth or development of something; a step in a series or process

hierarchy –n. a system in which people or things are ordered in a series of levels with different purposes and importance

entry-level –adj. at the lowest level, the level of someone just starting a job or career

ambition –n. a desire to be successful, powerful or famous

career –n. a job or profession that someone has for a long time

negative –adj. not good, not wanted

degree –n. an official document and title that is given to someone who has successfully completed a series of classes at a college or university

hike –n. a long walk, especially for pleasure or exercise, often in a natural place