Update Required To play the media you will need to either update your browser to a recent version or update your Flash plugin.
By Anna Matteo
20 February 2021

In many places around the world, wintertime brings snow, ice, and really cold temperatures. Some places can even experience a deep freeze!

But even if you do not live in an area with really low temperatures, you can still use "freeze" idioms and expressions. 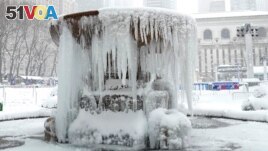 This photo is of a frozen fountain in New York City's Bryant Park during a winter storm on February 1, 2021. (Photo by TIMOTHY A. CLARY / AFP)

For example, you could use them at work.

During the coronavirus pandemic, many workplaces have put in place hiring freezes. With a hiring freeze, you are not able to hire more people. The hiring process is not moving. It is frozen.

During the pandemic, many businesses and companies also faced financial uncertainties. And some were not sure they would survive. So, many places may have put a freeze on wages. When your wages are frozen, they stay at the current level.

There is another way we "freeze" money. If you are having legal or financial trouble, the courts might freeze your bank accounts. When this happens, you cannot use money in a frozen account.

Now, "freeze" is one of those verbs that changes with every preposition you add to it. Let's start with "out." It makes the verbal expression "freeze out."

Sometimes in business dealings, some people or groups may get frozen out by others. If you are frozen out of a business deal, you are not involved. You don't have a seat at the table.

If you are a cold, unfeeling person, you may want to isolate someone socially. You don't invite them to parties. You don't tell them about fun events. You are trying to freeze them out of a group.

But this seems mean and childish. Freezing people out is something we might have done as children. If you ever have had a friend try to freeze you out of a group, if can hurt -- even years later. That memory can be frozen in your mind. It is unchanging and unaffected by the passing of time.

Now let's talk about the verbal phrase "freeze up." If something "freezes up" it stops working. An engine, for example, can freeze up – meaning it stops running.

People can also freeze up. If a person freezes up, they are so afraid or worried, they are unable to speak or move. For example, if I am afraid of public speaking, I might freeze up while speaking in front of a large group of people. I'm not able to say or do anything. Sometimes we can also just say "froze." I was so afraid that I just completely froze.

Of course, the word "freeze" also describes some weather conditions. The verbal "freeze over" is usually used to describe a body of water. If a lake has frozen over it is completely frozen. You can safely walk or skate on it.

But before we leave "freeze over," there is another way we use that expression. For example, if something is never going to happen, like not a chance, I can say "when hell freezes over." Hell is supposed to be a hot place. So, if it freezes over, you know things are bad.

Hey, Alyssa I got my boating license yesterday. How about you join me on the river sometime?

Sure ..Bradley ... when hell freezes over!

That's okay. You can stay in the boat.

And second, I've seen you drive. There's no way I'm getting in a boat with you.

So, it's a funny way to say "never." We use it jokingly. Personally, I would not use it in any serious situations, such as during a job interview or when meeting someone's parents for the first time.

And that's all the time we have for this Word and Their Stories.

If you know friends who might like this show, don't freeze them out! Invite them to listen.

wage – n. a payment usually of money for labor or services usually according to contract and on an hourly, daily, or piecework basis —often used in plural

isolate – v. to set apart from others