Blood Cancer Therapy Is Last Chance for Some

Update Required To play the media you will need to either update your browser to a recent version or update your Flash plugin.
By Mary Gotschall
07 March, 2016

Stanley Riddell is a researcher at the Fred Hutchinson Cancer Research Center in the U.S. state of Washington. He and his colleagues added molecules to immune cells that attack cancer cells. They put the modified cells back in the patient, where they multiply and fight cancer.

"So, that's the one interesting thing about this. It doesn't require repeated treatments or repetitive cycles of chemotherapy," said Riddell.

"That's what I think in the future may be most important for patients – that it's a single treatment instead of many months of treatment."

It has shown great promise in small trials with patients. In one study of 35 patients with a type of leukemia, 94 percent experienced a complete remission. Fifty percent to 80 percent of patients with other blood cancers also saw a reduction in symptoms. 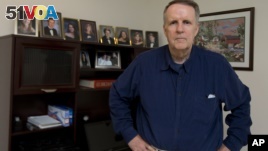 John Ryan of Aldie, Virginia, diagnosed with incurable lung cancer two years ago, was randomly assigned to receive the immunotherapy drug Opdivo in a study two years ago. Three months later, his tumor had been reduced by 65 percent. (AP Photo/Manuel Balce Ceneta)

Riddell said, "This is encouraging because these are all patients who have failed all conventional therapies, including many kinds of bone marrow and stem cell transplants."

Getting these very high rates of remission is "obviously very exciting for us," he added. These patients do not have any other treatment options that are likely to work.

Immune system cells usually fight invading viruses and bacteria. They can also combat cancer. But they are soon overwhelmed by the disease.

The work by Hutchinson researchers increases this natural cancer-fighting ability.

Using the immune system has also shown promise against skin cancer and some lung cancers. But for other cancers, immunotherapy is considered a last resort.

Riddell said he thinks that may change. In some cases, it may be better than chemotherapy or even replace it, he said.

therapy – n. the treatment of physical or mental disorders

leukemia – n. a serious disease in which the body forms too many white blood cells

remission – n. a period of time during a serious infection when the patient's health improves

conventional – adj. of a kind that has been around for a long time and is considered to be usual

marrow – n. a soft substance that fills the bones of people and animals