Update Required To play the media you will need to either update your browser to a recent version or update your Flash plugin.
By VOA
06 March, 2016


Former first lady Nancy Reagan has died at the age of 94, her spokeswoman told NBC News.

Nancy Reagan "will be buried at the Ronald Reagan Presidential Library in Simi Valley, California, next to her husband, Ronald Wilson Reagan, who died on June 5, 2004," Drake wrote Sunday. 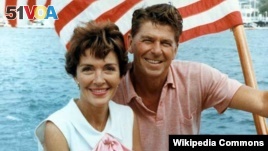 Nancy Reagan, who married Ronald Reagan in 1952, had been in failing health in recent years.

Nancy Reagan's major initiative as first lady was the "Just Say No" drug awareness campaign. She also became an advocate for finding a cure for Alzheimer's disease, which her husband contracted after leaving office.