Obama to Visit Cuba in March

Update Required To play the media you will need to either update your browser to a recent version or update your Flash plugin.
By Jim Dresbach
18 February, 2016

It will be the first time in nearly 90 years that a U.S. president visits Havana, the capital of the island nation.

Diplomatic relations between Cuba and the United States have improved in the past 14 months. The countries have re-opened embassies, and commercial airlines will fly between the two countries soon. 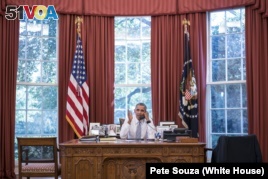 Plus, the U.S. removed Cuba from its list of state sponsors of terrorism.

Obama and Cuban President Raul Castro have talked via telephone and have met in person twice. Obama will meet with Castro during the March visit. He will also meet with Cuban activists who work for social causes.

"We still have differences with the Cuban government that I will raise directly," Obama wrote on Twitter. "America will always stand for human rights around the world."

The American presidency and Cuba had a sketchy relationship during the first half of the 20th century. President Calvin Coolidge visited Havana in 1928. President Harry Truman stopped by U.S.-controlled Guantanamo Bay and its naval base in 1948.

First Lady Michelle Obama will accompany the president on the Latin American trip. The Obamas will travel to Argentina after Cuba.

What do you think about President Obama's visit to Cuba? We want to hear from you. Write to us in the Comments Section or visit our 51VOA.COM.

sponsor – n. someone who takes the responsibility for someone or something

communist – n. a person who believes in communism or is a member of a political party that supports communism

normalizing – v. to bring someone or something back to a usual or expected state or condition

sketchy – adj. likely to be bad or dangerous