Update Required To play the media you will need to either update your browser to a recent version or update your Flash plugin.
By Christopher Jones-Cruise
26 January, 2016


America's top diplomat was in Cambodia Tuesday on the second stop of his trip to Asia.

Kerry said the country has improved its human rights record and made economic progress. But he said he told officials that he was concerned about continued human rights violations. 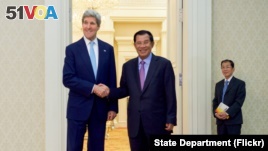 After the meetings, the U.S. official said that "democratic governments have a responsibility to ensure that all elected representatives are free to perform their responsibilities without fear of attack or arrest."

Seventeen opposition members and activists are jailed in Cambodia. Opposition leader Sam Rainsy is living in self-declared exile to avoid charges made against him. Many observers believe the charges are unfair. And rights groups say the United States should not improve relations with Cambodia until its leaders guarantee reforms.

Secretary Kerry also praised Cambodia for its economic progress. He told the prime minister that "Cambodia has experienced remarkable growth. You have seen incredible changes -- not just here in Phnom Penh, which moved from a 350,000-person war-torn city to a much more modern city of 2.2 million people."

remarkable – adj. unusual or surprising; likely to be noticed