Update Required To play the media you will need to either update your browser to a recent version or update your Flash plugin.
By Mario Ritter
24 January, 2016

Falling oil prices are one reason leading measures of world stock markets have dropped in value this year.

Oil is one of many issues the forum's delegates are talking about. Crude oil now is priced below $27 a barrel on the world market.

Lew said that means consumers "have more money in their pockets," to buy products they need or to improve their own finances by paying down debt or saving money. He noted that low oil prices do not have "to be bad for the overall global economy."

Once a year, political and business leaders, activists and others gather in Davos for talks on issues that beyond economics.

She said questions about the value of the Chinese currency, the renminbi, are at the center of current fears about the country's economy.

Feng Xinghai, the vice-chairman of China's securities regulator, reacted to her comments. He said, "We have to be patient because our system is not structured in a way that is able to communicate seamlessly with the market."

Jack Lew said the slowdown in Chinese economic growth, the other main factor in falling stock prices, was not a surprise. But he said it shows China needs to press ahead with a "long and difficult transition" to change its economy.

That means the country should redirect its attention from exports to a more consumer-driven economy.

China this week said its economy grew by 6.9 percent in 2015. That was its slowest growth in 25 years.

U.S. Vice President Joe Biden also spoke at Davos. He called for a fairer share of the gains resulting from progress in technology. He spoke days after the non-profit group Oxfam reported that the world's 62 richest people own as much wealth as half of the rest of the world.

Biden called for the end of offshore tax shelters for the rich. He also urged political and business leaders to create economic opportunities for more people.

Biden asked, "Will we end up creating more of a two-tier society than exists today?" 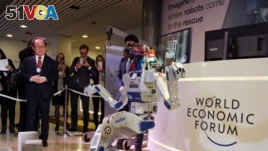 Technologies like robotics are seen as a driver of the so-called Fourth Industrial Revolution. HUBO, a walking humanoid robot performs a demonstration of its capacities next to its developer Oh Jun-Ho during the annual meeting of the World Economic Forum.

High-level technology received a lot of attention at Davos because of a robot attendee. HUBO is the South Korean humanoid robot. It won the DARPA Robot Challenge last year. The robot showed its ability to walk and operate tools.

And the Internet of things, electronic devices connected wirelessly by the Internet, was identified as a rapidly developing field. Delegates also talked about three dimensional printing and even implanting phones in the body. These technologies are seen as driving what has been called the Fourth Industrial Revolution.

Not all of the meetings deal with business.

Queen Rania of Jordan said short-term solutions can lead to long-term problems. She appealed to rich countries to create a special economic zone for refugees from Syria. Syrian refugees now make up 20 percent of Jordan's population.

On Friday, U.S. Secretary of State John Kerry praised the work of the international coalition fighting the Islamic State in Iraq and Syria. He promised the militant group would be defeated.

Kerry also said the best way to ensure peace in the Middle East is to work toward a negotiated political settlement in Syria.

And that's In The News.

This story includes material from reports by VOA's Ken Bredemeier and Zladica Hoke. Mario Ritter adapted it for Learning English. George Grow was the editor.

offshore – adj. located in a foreign country or territory

consumers – n. someone who buys good and services

opportunities – n. chances to do or accomplish something